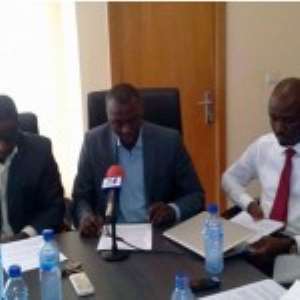 Officials of ACEP at the press conference

The Africa Centre for Energy Policy (ACEP) says it is worried about the GH¢83 million which has been withheld for more than three years by some banks for undisclosed reasons.

This came to light on Thursday in Accra during a sitting of the Public Accounts Committee of Parliament (PAC).

In a statement, it said: “ACEP has consistently maintained that the transparency and accountability mechanism around the governance of taxes and levies on downstream petroleum sector needs urgent improvement to ensure that taxes and levies are used for the intended purposes for which consumers are made to pay.”

According to ACEP, “It is instances like these that continue to burden citizens with levies such as TOR debt recovery levy with no definite schedule for repayment. The Ministry of Finance has over the years violated the legal requirement to account for the receipt from the TOR debt recovery levy to Parliament as required by law.”

TOR Debt Recovery Fund Levy Act 2003 (Act 642) states: “The Minister shall within three months after the end of each financial year submit a report on the Fund to Parliament.”

.
However, it said the Minister has not complied with such requirement of the law.

It also called on Parliament to monitor the implementation of the laws it made to ensure that implementing bodies do not flout the laws.

“If Parliament had been demanding timely accounting of public funds, we will not be talking about petroleum levies kept in banks for more than three years.

“Society would have benefited from the investment of such monies. In the specific instance of the GH¢83m of petroleum taxes kept by banks, ACEP calls on Parliament to probe the matter so that those responsible should be punished whilst the banks involved should be made to pay appropriate interest on it.”

ACEP additionally called on the Minister of Finance to consciously report on the receipt and utilization of taxes imposed on petroleum products to improve transparency and accountability and also improve public confidence in the payment of taxes.

“ACEP will continue to monitor the governance space on the petroleum sector, particularly the reporting requirements under the Energy Sector Levy Act 2015 (Act 899) to ensure that petroleum levies are not kept by banks or misapplied.”