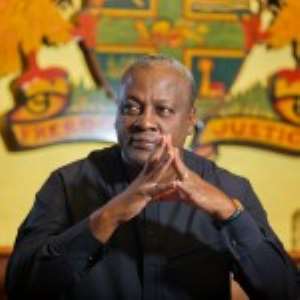 President Mahama's recent reshuffle has caused bitterness among some tribes up North with their chiefs openly expressing their displeasure and demanding answers from the presidency.

Information reaching DAILY GUIDE indicates that some loyalists and non-party residents across the Bunkpurugu constituency under the command of some displeased chiefs angrily stormed the NDC Constituency chairman's house to register their frustrations on the failure of the NDC administration to consider any Bimoba man or woman for a position in the John Mahama administration.

The President as empowered by the constitution last week made some changes in his government and among the changes, the President appointed a Mamprusi man and former PNC parliamentary candidate, Abdullai Abubakari as the Northern Regional minister designate.

The Bimobas, after hearing the announcement questioned the process and wondered why Bimobas are never appointed into government.

Speaking to DAILY GUIDE the NDC Chairman of Kpemali branch near Nakpanduri, Robert Nunifant said “There are a number of issues that are of concern, but the most prioritized that we need immediate answers to include the road from Binde-Bunkpurugu and the appointment of Bimobas in governance.”

According to Robert the President stated clearly during his 2012 campaign that, the road will not be in the same condition before the next election; “we have also noticed with keen crosschecking that, Bimobas, since independence had never been put into any Ministerial appointment of any government, what exactly is the test, such that, Bimobas cannot pass it?” He asked.

“We, however, remain committed to the President's vision of changing lives and transforming Ghana and wish to assure him of our support to complete his eight (8) years in office”.

The Chief of Bunkpurugu, Naa Alhaji Abuba Nasinmong told DAILY GUIDE that various Bimobas like Yandam Gbia-Laar and Dr Benson Konlan and many others were mentioned for presidential appointments but none of them materialized.

“All of these names were just a few of the many potential people from the Bimoba land who can perform the same duties as others do in the various Ministries and government's offices,” he lamented.