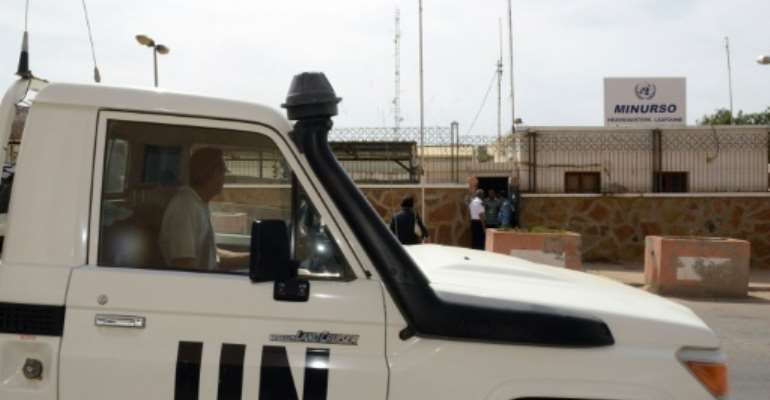 An UN vehicle drives past the headquarters of the United Nations Mission for the Referendum in Western Sahara (MINURSO), in Laayoune, the largest city of the disputed territory. By Fadel Senna (AFP/File)

The Security Council is set to vote Friday on the draft text on renewing the MINURSO mission's mandate for a year amid sharp divisions on the council on the way forward.

The vote was postponed by a day to allow for more discussion. Russia's Ambassador Vitaly Churkin said talks were "not going to be easy."

The draft resolution, obtained by AFP, calls on UN Secretary-General Ban Ki-moon to report back to the council in four months on whether the MINURSO mission has been restored to "full functionality."

An earlier text provided for a two-month deadline for the report.

That provision is expected to raise concerns among some council members who fear that Morocco, backed by France and Senegal, is seeking to delay action on re-establishing the full strength of the mission.

Morocco last month expelled 75 staffers in angry retaliation over Ban's use of the term "occupation" to describe the status of Western Sahara.

Rabat maintains that Western Sahara is an integral part of the kingdom and has long resisted UN efforts to resolve the decades-old conflict. It pits Morocco against independence-seeking Sahrawi rebels of the Polisario Front.

The draft resolution expressed concern that "MINURSO's ability to fully carry out its mandate has been affected as the majority of its civilian component, including political personnel, cannot perform their duties within MINURSO's area of operations."

Under the proposed measure, the 15-member council will "consider how best to facilitate" the mission's return to full capacity if the crisis over the peace mission is unresolved in four months.

A previous text contained stronger language, calling on the council to "take immediate measures" to restore the full functionality.

Churkin told reporters after a closed-door council meeting to discuss the draft that there was "room for improvement" and suggested that some council members were looking to strengthen the text.

Venezuela, Uruguay and New Zealand have argued strongly that Morocco should not be allowed to downsize MINURSO and that failure to take strong action would send a signal to other governemnts unhappy with a UN presence to do the same.

MINURSO was established in 1991 after a ceasefire ended a war that broke out when Morocco sent troops to the former Spanish territory in 1975.

The mission was tasked with organizing a referendum on the future of the territory that never materialized.

The Algerian-backed Polisario Front, which has long campaigned for a referendum on self-rule, has called on the council to impose sanctions on Morocco if it refuses to allow the peace mission to operate fully.

"This is unprecedented, this kind of challenge to the Security Council," said Emhamed Khadad, the coordinator from the Polisario Front.

Khadad said the crisis over MINURSO was "manufactured by Morocco to distract from its unwillingness to engage in meaningful negotiations" on a final settlement for the territory.

Ban has warned that a weakened peace mission in Western Sahara will likely open up an opportunity for extremists to move in and could lead to a return to full-scale conflict.