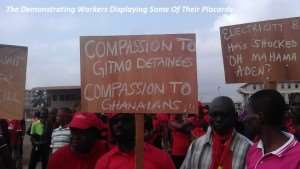 The call on the government to cause a reversal of the increment in utility and fuel prices, which it is unwilling to grant, is a force, not a request, an incensed immediate past Chairman of the Judicial Service Association of Ghana (JUSAG), Mr. Francis Barkwa, has stated.

In an interview with The Chronicle during a peace march organised by the Trades Union Congress (TUC), Industrial and Commercial Workers Union (ICU) and other groups in Accra yesterday, Mr. Barkwa bemoaned the government’s dereliction of the plight of the Ghanaian worker, hurling the caution that, “if the President fails to listen, he does so at his own peril.”

The judicial staffer could not make sense of the current increase in fuel prices in particular, in spite of the reduction in the prices of the commodity on the world market. “The government is there for us. You brought the increment, and we say we cannot pay; as a listening government, you must do something about it, “he said, adding that “even oil prices have down, but he’s gone ahead to increase the prices of fuel. All we are telling him is that we cannot pay.”

Mostly clad in red apparel, the demonstrators, quite disappointing in numerical strength, converged at the popular Obra Spot, near the Kwame Nkrumah Interchange in Accra, under the guard of high police presence. The St. John Ambulance was also at post to respond to emergency situations.

The procession, which was themed “Organised Labour Demonstration–Suffering in the Land”, began at exactly 9.30 a.m. Amidst drumming and dancing, the demonstrators marched past the newly-constructed interchange to link the Kwame Nkrumah Avenue leading to Adabraka, through to the Liberia Road, just behind the headquarters of the TUC, and ended at the Independence Square.

There was a display of various shades of placards, which sought to unveil the frustrated conditions of the workers. Some of the writings on the placards read; “Reduce Tariffs Now”, “Oh Mahama, Why?”, “Prez Mahama, be Compassionate”, “Spare us our future politicians” and “How can this be a Better Ghana?”

Others also read, “Ebolaic Economic Policies Killing Workers”, “Ya-Bre”, “We Need Leaders who can bring Change”, “We want the utility tariffs cut in half now” and “The worst form of violence is Poverty.”

After about two hours of hitting the streets, the peaceful march was climaxed at the Independence Square, where the Secretary General of the Trades Union Congress, Mr. Kofi Asamoah, addressed the protestors.

The Secretary General was convinced the International Monetary Fund (IMF) coerced the Mahama-led administration to increase the utility tariffs. “We are aware of the stick the International Monetary Fund is holding over government following the Extended Credit Facility…We would like to draw your attention to the social and political implications of such actions that are completely divorced from the realities facing most Ghanaians,” he explained.

He also made reference to a Working Group set up by the President to find solutions to the concerns of his members, but which failed to provide satisfactory results. “The message we are getting from our participation in the Working Group is that government remains adamant to our demands,” he narrated.

The TUC Secretary General asked for a complete withdrawal of the Energy Sector Levies Act (Act 899, 2015). He blamed the act on “very steep increases in petroleum prices, at a time when crude oil prices are tumbling on the international market and the exchange rate of the Ghana cedi is relatively stable.”

While confessing that Organised Labour was not in denial of the need for some increases in utility tariffs, Mr. Asamoah appealed to the government to reduce the rate of utility tariff increases from their current levels to 50 percent for both water and electricity.

“Additionally, the lifeline consumption for water should remain at between 0 and 20 cubic metres,” he said. Mr. Haruna Iddrisu, Minister for Employment and Labour Relations, who received the petition on behalf of the President, promised to forward it to him as soon as possible. He used the opportunity to praise the demonstrators for a peaceful and incident-free procession.

“While your concerns are legitimate, the decision was taken, not for political expediency or for election purposes, as others are peddling around…it is to assist in the development of the country,” Mr. Iddrisu pointed out.

He assured leaders and participants of the demonstration that the petition would be worked on to see how best their demands could be addressed. “Government does not take delight in inflicting pain on the Ghanaian worker,” he posited. Continuous on page 12

Odododiodoo: ‘Impotent’ Police Cause Of Constant Clashes – ...
17 minutes ago