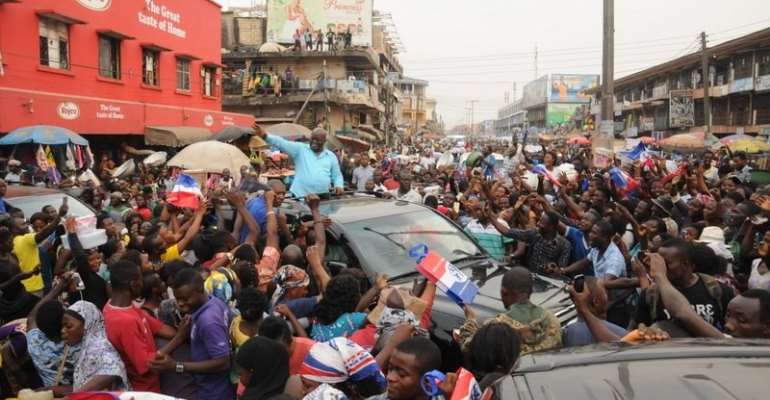 Akufo-Addo responding to cheers in Kumasi

The presidential candidate of the New Patriotic Party, Nana Addo Dankwa Akufo-Addo, is promising a first class government if he wins the 2016 elections.

Akufo-Addo has assured of a government which will end the spectre of fire outbreaks in Ghana, leading to the loss of lives.

“An Akufo-Addo government will ensure that securing our markets, which is the source of livelihood for many families across the country, is a topmost priority. We will make our markets safe for you so that you can make a decent living out of trading. The spectre of losing your livelihood because of fire outbreaks must end,” Nana Addo said while consoling victims of two separate fire outbreaks in Kumasi, which hit the Kumasi Central Market and the ‘Dagomba Line’ area, in Aboabo, within a spate of five days.

Nana Akufo-Addo first visited the worst hit parts of the market, where some 400 shops had been razed down by the January 6, 2016, fire.

Addressing a huge crowd of market women, the NPP flagbearer bemoaned the failure of government to pay critical attention to markets across the country, and put in place measures that will reduce the incidence of market fires to the barest minimum.

He contributed 200 bags of cement towards the rebuilding of the market.

With less than 10 months to the holding of the 2016 election, Nana Akufo-Addo explained that it is imperative for all eligible Ghanaian voters to exercise their God-given power and elect, peacefully, a government that will replace the "incompetent administration of President John Mahama, whose government has only brought hardships and poverty to Ghanaians."

“I want you to put your trust in me and put Ghana under an Akufo-Addo government,” he said.

“My government, I assure you, will manage the resources of this country prudently and put the country back onto the path of progress and prosperity. I am not coming into office to steal your money. I am not seeking your mandate because I want to enrich myself. No! I am coming to assemble a first class government whose sole aim will be to bring relief to all Ghanaians. I am coming so all Ghanaians, without discrimination, can make a decent living,” he said.

To this end, Nana Akufo-Addo urged the market women to help send the NPP’s message of hope to every corner of the Ashanti region, so that “the NPP will record a massive margin of victory in the Ashanti Region, and across the country, when the results of the 2016 elections are declared.”