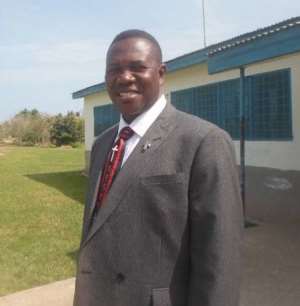 A GNA Feature by Morkporkpor Anku
Accra, Jan. 21, GNA - Reverend Joseph Jehu-Appiah, an ordained priest, physiotherapist, trained teacher and philanthropist, sets off daily to visit remote communities to impact the lives of disadvantaged and physically challenged through his ministry.

On one of such occasion, Rev Jehu-Appiah, together with his wife, came across a physically challenged child, who he thought of helping, so he gave his telephone number, to enable the girl's parents for possible arrangement to provide support to her.

In the course of the conversation with the young girl, the Reverend observed a scenario, which alerted the philanthropist and also gave him the sense that she might possess the potential to achieve something beyond her expectations.

This demonstration caught the attention of the philanthropist and his wife, who then gave her a slate and some pieces of chalk.

The girl immediately started scribbling on a slate given to her to the amazement of the two.

Here was a young girl, who had lived her whole life in a community where handsets are unknown but knew how to handle one. One who had never been to school, but could scribble on a slate- these were signs of brilliance.

The Reverend and his wife then tried enrolling their new discovery in the nearest school, but she was rejected simply because 'she was not a normal child', according to the headmaster of the school.

This rejection, however, became a blessing in disguise.

The philanthropists, now fully aware of the predicament of the young girl and many others, who have been denied access to schools as a result of their challenges, decided to set up a training centre to cater for and educate the disadvantaged in the society.

The training centre was expected to, upon completion, provide a common educational environment for all disadvantaged young people to learn at their own pace.

Students from the centre are, therefore, expected to be, at a later stage, integrated into mainstream schools at the junior high school level.

Since the establishment of the Mephiboshet Training Centre, a number of talented young people have been educated, counselled and provided with an opportunity to excel and be integrated into mainstream schools and the society, which hitherto closed their doors to them.

Rev Jehu-Appiah's passion to help the needy and the disadvantaged has helped a lot of young people to fulfil their dreams of getting educated.

He is a finalist of the MTN Heroes of Change project, where they are being accessed on how their various initiatives in the areas of health, education and economic empowerment are impacting the lives of the intended beneficiaries.

At the end of the series, the independent panel of judges would select three category winners and an ultimate 2015 MTN Hero of Change.

The public is encouraged to vote for their favourite heroes by testing their names to short code 1406 on all networks to determine the winners.