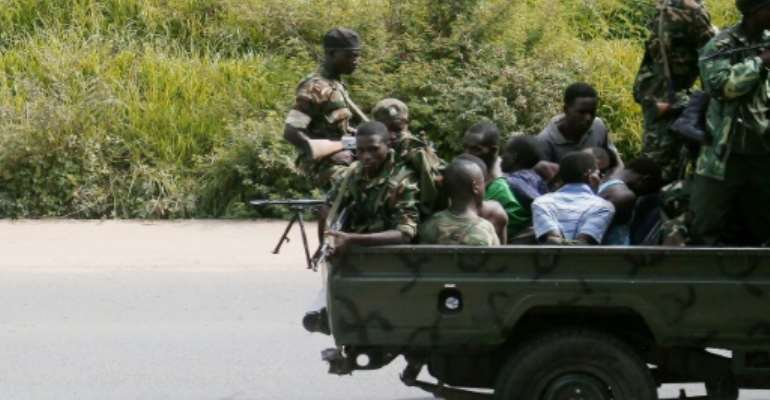 A military vehicle, carrying men tied up, drives through the Musaga neighbourhood of the city of Bujumbura on December 11, 2015. By (AFP/File)

Bujumbura (Burundi) (AFP) - UN Security Council ambassadors arrived in Burundi Thursday to protestors telling them not to interfere, as they came to push the government to open up serious talks with the opposition and accept peacekeepers.

A crowd of hundreds of protesters backing the government, carrying signs in English that said "genocide will not happen" and "stop interfering in Burundian affairs", greeted the diplomats as they landed in the capital Bujumbura, an AFP reporter with the council said.

At a meeting planned for Friday, the council hopes to persuade President Pierre Nkurunziza to agree to an African Union proposal of 5,000 peacekeepers, which his government has branded an "invasion force".

Before UN diplomats arrived, the AU expressed its "fervent hope" the diplomats will persuade Burundi to begin serious talks and agree to the deployment of peacekeepers to prevent further violence.

AU Commission chief Nkosazana Dlamini-Zuma said in a statement that there was an "urgent and imperative need for a strong unity of purpose" to solve the crisis.

Discussion of the peacekeeper deployment is expected to be a key element of talks at the AU summit in Ethiopia on January 30-31.

An AU deadline for Burundi to accept the force has long passed with no action yet taken to deploy the peacekeepers, named the African Prevention and Protection Mission in Burundi (MAPROBU).

Dlamini-Zuma expressed "the fervent hope" that the UN ambassadors will "contribute toward achieving" the rapid deployment of MAPROBU and the "immediate resumption of the inter-Burundian dialogue", in reference to stalled talks between the government and opposition.

But the protestors who had been waiting for the diplomats made clear their opposition.

Relations between Rwanda and neighbouring Burundi are tense, with Bujumbura accusing Kigali of backing armed rebels and political opponents of Nkurunziza. Rwanda has denied all the claims.

Burundi descended into bloodshed in April when Nkurunziza announced his intention to run for a controversial third term, which he went on to win in July elections.

More than 400 people have died in the violence and at least 230,000 have fled to neighbouring countries.

Hours before the UN diplomats arrived, Burundian rebels named a fugitive ex-general who fled after leading a failed coup bid last May as their leader.

The rebel force, which announced its formation in December after months of unrest and bloodshed in the troubled central African country, calls itself the Republican Forces of Burundi, or "Forebu" after its French acronym.

The rebels formed the force "to protect the population" and uphold the Arusha Agreement that paved the way to the end of the 1993-2006 civil war but which they say Nkurunziza violated by running for, and winning, a third term in power.