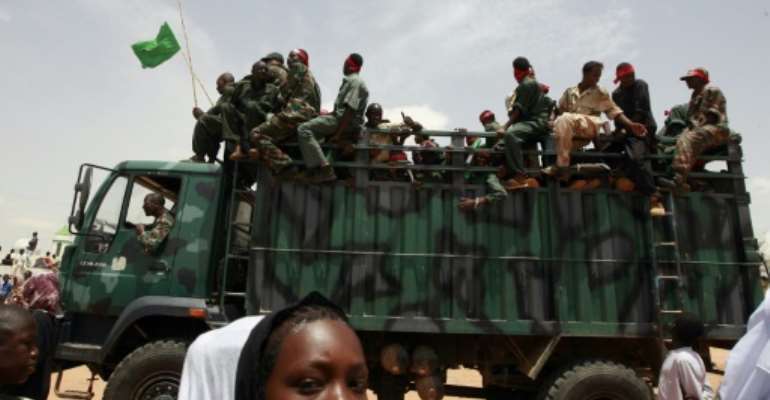 A Sudanese girl walks past a truck carrying soldiers in the West Darfur state capital of El Geneina on July 24, 2008. By Khaled Desouki (AFP/File)

Khartoum (AFP) - Sudan's parliament Wednesday amended its criminal law to increase the penalty for causing criminal damage during riots from six months in prison to a maximum five-year jail sentence.

The changes come one week after deadly unrest at a town in the western Darfur region, in which at least six people were killed and local government buildings were reportedly damaged.

Under the amendment, anyone causing criminal damage in a riot "incurs a penalty of prison for a period of no more than five years with a fine that is equivalent to the value of the damage", parliament speaker Ibrahim Ahmed Omer announced after the changes were approved by lawmakers.

Previously, anyone convicted of causing criminal damage faced either a six-month prison sentence, a fine or 20 lashes.

If they a carrying an "object that could be used to cause death or serious harm", they will also face a one-year term.

Darfur has been mired in conflict since 2003, when ethnic insurgents rebelled against President Omar al-Bashir complaining that their region was being marginalised.

The region has sank further into violence in recent years with fighting between Darfur's myriad ethnic groups and rising criminality in certain areas.