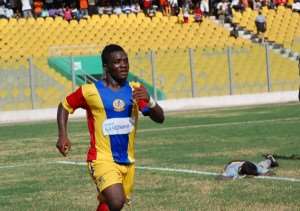 The 21 year-old box to box midfielder signed a three-year deal with the Cape Coast-based club last Monday for a figure believed to be in the region of GHC 20,000.

Romeo after mutually terminating his contract with Hearts of Oak prior to the 2014/15 league season has been without a club;

The former Great Olympics anchor will now feature for Dwarfs who are burnt on taking the 2016 league by storm.

'We have signed Romeo Agban on a three-year deal. He has played in the league before and other junior national teams and we believe his experience will help us when the league takes off.

'He is young and very talented that is our transfer policy, before signing him certain clubs were also targeting him but he opted to sign for us,' a source close to Dwarfs told Ghanasoccernet.com.