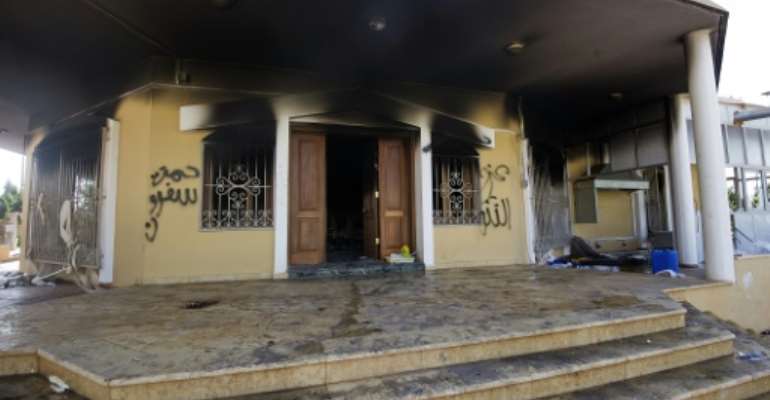 A burnt building is pictured at the US consulate compound in the eastern Libyan city of Benghazi on September 13, 2012. By Gianluigi Guercia (AFP/File)

Washington (AFP) - The deadly militant attack on the US consulate in Benghazi, Libya in 2012 continues to haunt Democratic frontrunner Hillary Clinton, this time in the form of a Hollywood action movie.

The thriller about the assaults that left four Americans dead including US ambassador Chris Stevens is winning praise from conservatives because of its indirect criticism of Clinton, who was secretary of state at the time.

"13 Hours: The Secret Soldiers of Benghazi" tells the story of the night of September 11-12 through the eyes of six characters -- former special ops soldiers hired by the CIA to provide security for its secret facilities in the coastal city of Benghazi.

The film follows their heroic fight over the course of a night amid non-stop explosions that are the trademark of the films of director Michael Bay (such as "Transformers", "Pearl Harbor", "Armageddon") to repel the attacks.

The first wave comes in the early evening against the US diplomatic mission, where Stevens was present and died quickly as he suffocated in the smoke of a fire set by the attackers. A computer expert named Sean also died.

The second assault lasts hours and targets a nearby annex of the CIA. There, six men shooting from the rooftop fight off dozens of heavily armed men until a mortar blast kills one of them, Tyrone Woods, and another operator, Glen Doherty, who arrives from Tripoli in the middle of the night.

The film's thesis is clear cut: despite multiple appeals, these men in Benghazi received no reinforcements from Washington or the Pentagon.

Although Clinton and President Barack Obama are never mentioned, the film depicts a political and military bureaucracy that is incompetent -- unable even to dispatch some F-16 fighter aircraft as a show of force. One sees a character carrying out the role of an ineffectual military commander.

In actual fact, congressional probes have shown that no plane or armed drone or ground forces were available and in a position to arrive in time to help the American men fighting in Benghazi. Republicans in Congress have nonetheless accused the administration of negligence for having left the US diplomats and staff in Benghazi without enough protection in a dangerous city.

Clinton the candidate survived a day of congressional hearings convened by her Republican adversaries in October.

For conservatives, the film is their revenge -- a tool to win over millions of viewers who may not know all the details of the tragedy.

- Ranked fourth in the box-office -

Fox News, which is popular among many Republicans, has devoted much air time to discussing "13 Hours."

Star Fox News anchor Megyn Kelly invited three of the men depicted in the film onto her show Monday. She said the movie captures "the desperate calls for help that went unanswered by President Obama's administration, including Hillary Clinton's State Department."

"My view is that they didn't even try," said one of the American fighters, former Army Ranger Kris Paronto.

A few days ago, Smith's mother Patricia said in tears on the same show: "Hillary is a liar."

She and Woods' father say Clinton told them personally the attack was a spontaneous outburst that stemmed from an anti-Islam video that had triggered unrest in much of the Arab world. It later emerged that the attack was premeditated.

Although the film's producers say it is non-political, the launch strategy targets conservatives, military personnel and people who are religious.

"Conservatives will say this film makes the Democratic decision-making at the time look bad. That is not our focus or our goal. Our goal is to show this amazing heroism that has been pushed into the background because of the politics," Paramount vice president Rob Moore told Hollywood Reporter.

Hillary Clinton has not reacted, saying she has not had time to see the movie. But could it change her image?

"Right now, she's running for the Democratic nomination, and that may not affect her as much in that race. But it could open up the question of the electability issue," Timothy Hagle, a political science professor at the University of Iowa told AFP.

"This might cause some people pause," he said, particularly for undecided voters when the election itself rolls around in November.

The presidential election process formally starts February 1 with the Iowa caucuses in which Democrats and Republicans cast their first votes for their respective party's nominee.

Word of mouth will be critical to getting people other than Republicans to see the movie.

In its first weekend in US box offices "13 Hours" finished a respectable fourth -- but still far from the blockbuster returns of another recent war movie, "American Sniper."