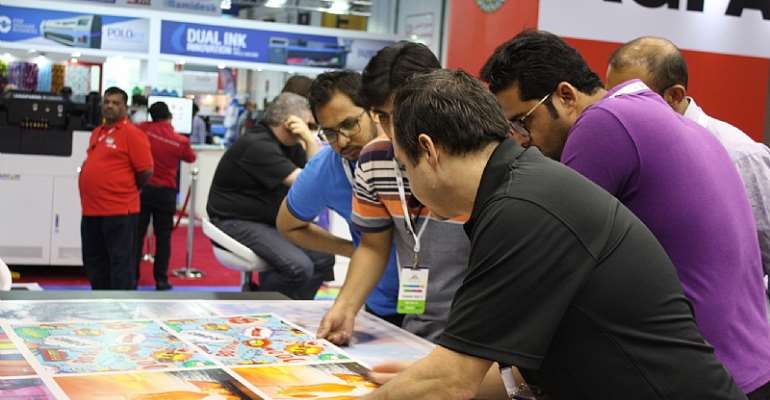 The 19th edition of the most popular show for the MENA region and beyond brought not only new state-of-the-art machinery to the region but also underlined its importance for the printing industry.

Dubai, January 13 2016. SGI Dubai 2016, the largest and oldest trade show in the MENA region and beyond, that just closed its doors at the Dubai World Trade Center (WTC) ended on a high note. The show floor has been bustling with activity during the 3-day-show amid a thrilling atmosphere.

The variety of equipment and software solutions for all kinds of work related to signage, retail, digital printing and finishing was, for the first time divided into pavillons: Print fabrication, finishing, textile, screen as well as digital printing, digital signage and retail.

Not only the more than 400 exhibitors but also the more than 13,000 visitors from all around the world accepted and hailed the new introductions at the show. Much sought after have been all the different applications that exhibitors were showcasing. Another hot topic was digital textile printing that not only caters to soft signage but now also puts its mark on interior design - be it personalised and individualised solutions or short run.

At SGI Dubai 2016 it was evident that print service providers care a lot about the environment. Latex, Solvent-UV, acqueous and UV-LED printers and recyclable, environmentally friendly consumables that were presented at the show received much attention due to their lower impact on the environment.

"We are very happy that the new introductions as well as the host of innovations have been received so well by the public. In bringing the newest and most sophisticated machines and software solutions to the MENA region and beyond, we make it possible for print service providers to always stay up to date thus enabling them to realise new applications and increase business", says Mr. Sharif Rahman, CEO, IEC. "This years show has been of much importance as the upcoming Expo 2020 in Dubai is already shining its light on the country and beyond.

Businesses will thrive with the multitude of different signage applications and creativity that surrounds not only today's business environment but also future events. Next to the pure technology, the warm, welcoming and friendly atmosphere at the show enables all market participants to network, discuss and learn from each other, thus establishing higher standards for the whole printing industry."

Until SGI Dubai 2017 starts, printers, exhibitors, visitors can keep themselves abreast of new developments, trends, news and all that refers to signage and print by visiting the SGI Resource Center at www.signageresource.com .