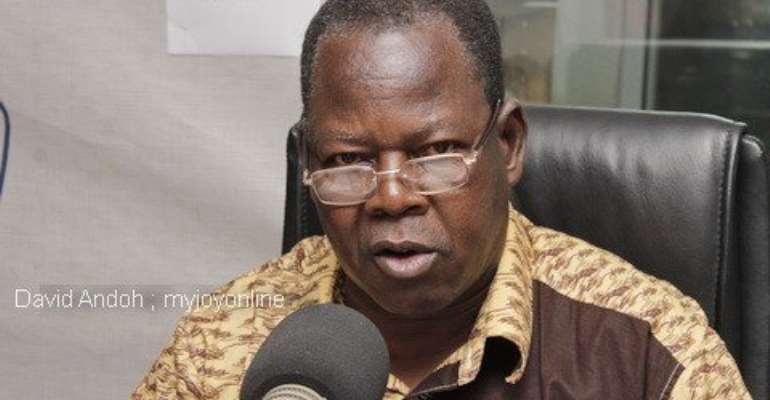 Ghana's defence ministry and its military apparatus are hiding behind national security to hide key information from the tax payers, the Ghana Integrity Initiative has suggested.

Executive Director of the Initiative Vitus Azeem says the practice could pose a high risk for corruption by officials in the sector.

His comments follow a report released by Transparency International which scored Ghana low marks for not doing enough in the area of transparency and accountability in the defence and military sectors.

The report rated Ghana D with a mark of 33.3 per cent and described Ghana as a high risk of potential corruption in the defence and military sector.

Vitus Azeem agrees entirely with the conclusions of the report.

He told Joy News' Evans Mensah the military for a very long time has been operating in secrecy and that is a major cause for worry.

"They are a public institution and they are funded by the state from the taxes of the people and so when it comes to the use of public resources to much secrecy raises concerns," he said.

He said if at all the military cannot make public some of the procurements and decisions they make, they can at least open up to the Auditor General and be transparent with him.

"If you say you have bought two aircraft, at least the Auditor General should be able to verify the purchases and all that," he explained, but that is not the case, Azeem added.

He said national security is always used as a way to cover up and people can take advantage of that to dupe the nation.

"We need to be specific about what is national security and what is accountability," he indicated.

He said the report is to encourage the defence ministry as well as the military to open up a bit in terms of their expenses and recruitment processes.

But the Defence Minister Benjamin Kunbour admits there are challenges with how the defence sector goes about its activities but said the conclusions arrived in the report at too general and sweeping.

He explained there is a conflict between what the 1992 Constitution says about civil controls in military sector in our recent democratic dispensation and an Act of 1962 which spells out detailed implementation of recruitment retirement and pensions.

"In all mature democracies and countries practicing constitutional democracy there have civil controls of the defence sector. This require lots of reorientation of guidelines, regulations, rules of procedures to be in tune with the constitutional arrangement," he stated.

He said it was the duty of the Armed Forces Council to set up a committee to realign and resolve this conflict but has yet to do that. He said is now liaising with the legal department of the Defence Ministry to have it done.

He also dismissed assertions that items sole sourced are mostly done with corruption and inflation of prices in mind.

Dr Kumbuor said there are some items which are of strategic importance to the state and which cannot be bought under any other procurement option than through sole sourcing.

He said the country's security will be compromised if some of the equipment procured are not procured through open tender.

Dr Kunbour was emphatic that under his tenure as Defence Minister, all procurements have been fully verified by the Auditor General.