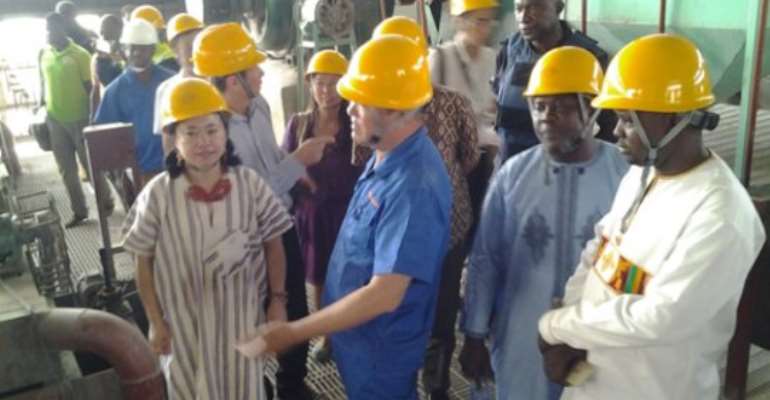 Gbane (U/E), Jan. 19, GNA - The Chinese Ambassador to Ghana, Ms Sun Baohong, has called for a joint collaboration between the governments of China and Ghana to fight illegal mining in the country.

The Chinese Ambassador made the call when she paid a working visit to the Shaanxi Mining Ghana Limited, operating at Gbane in the Talensi District of the Upper East Region.

The Company, which was granted license by the Minerals Commission in 2008, has since been offering mining support services to two small scale mining groups, namely Yenyeya and Pubortaaba Mining Groups.

The Ambassador expressed concern about media reportage of some Chinese involvement in illegal mining activities, saying not only were Chinese engaged in such activities, but also some Ghanaians and other nationals.

She therefore called for a concerted effort from both the Chinese government and the Ghana government to dialogue effectively on how to tackle the menace.

Whilst commending the Shaanxi Mining Company for contributing to job creation and curbing rural urban - migration in the Region and living up to its Cooperate Social Responsibility (CSR), she called on the Management to ensure that they operated according to the mining and safety laws in Ghana, paying particular attention to the environment.

The Ambassador said she was overwhelmed by the mining equipment of the Shaanxi Company and gave the assurance that her outfit would lobby to support the growth of the Company.

Briefing the Ambassador on the activities of the Shaanxi Company, the Public Relations Officer, Mr Maxwell Woomah, said the Company was not only the largest mining Company in the Region but in the Northern and Upper West Regions.

He said the Company employed 520 people and had the capacity to mine 1,000 tonnes of ore per day, but presently mine 200 tonnes.

He stressed the need for the law to be relaxed so it could offer more mining support services to other small scale miners and employ more people.

'The Company paid 70,000 Ghana cedis to the District Assembly as Business operation rates, paid compensation to affected farmers, and signed a memorandum of understanding with the community to provide a school as well as construct boreholes,' he indicated.

The Safety Engineer of the Company, Mr Thomas Yenzanya, who took the stakeholders through the Company's profile, stated that the Company operated according to mining laws and regulations of the country, and stressed that it had the best safety measures in place and also renewed its license annually.