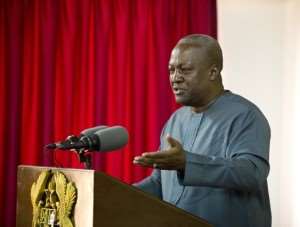 After concealing vital information about the two ex-Guantanamo detainees transferred to Ghana, from the Government, it appears Americans have the intension to launch a mockery attack on the West African country, as a Fox News Contributor has set the stage with the obnoxious claim that Ghana cannot be located on the world map, hence the silence from the citizens and the press, when the Yemeni nationals arrived in the country.

Charles Krauthammer, while registering his view on Guantanamo Recidivism Concern as part of discussions on Fox News' Special Report, indicated that, the reason importation of the duo “hasn't registered in the press, public opinion, is because nobody can find Ghana on the map.”

Even though he would not fault the President for accepting the terror suspects because: “I assume they gave the Ghanaians false information about the nature of these guys”, he juxtaposed Ghana's situation with what will possibly be the charged atmosphere in the United States, if they had been transferred there.

According to him, “…when they try to send one of these miscreants to the US, it will be a huge story and that is why they are sending them abroad.” Mahmud Umar Muhammad bin Atef, 36, and Khalid Muhammad Salih al-Dhuby, 38, were held in the notorious American detention facility in Cuba for 14 years, without charge. They are to settle in Ghana for two years.

Following their arrival, various concerns have been expressed. While the ruling government, the National Democratic Congress and its communicators are in constant defence of the deal for them to resettle in Ghana, members of the opposition persistently bash government for the decision, demanding their repatriation.

Deputy Communications Minister, Felix Kwakye Ofosu, in an interview with Accra-based radio station, Joy FM, rubbished the agitations by some Ghanaians to send back the Guantanamo Bay ex-detainees, saying it was not possible, per the agreement reached with the United States.

According to him, “The ex-detainees were not brought here against their will and cannot leave before the two years agreement signed between their government and the government of Ghana. So all we can do as a country is to put measures in place to prevent the peace of this country from being undermined…”

During a session with journalists at the seat of Government, the Flagstaff House recently, President John Dramani Mahama in his response to a question concerning the former Guantanamo Bay detainees, allayed fears that they could be a threat to the security of the country.

He said: “These two detainees, Al-Dhuby and Bin Atef were considered to be the most compliant detainees in Guantanamo camp, “ buttressing his contention that they were put in the lowest category at the detention centre.

But contrary information available to Thomas Joscelyn, FDN for Defence of Democracies, who was also a panelist of Fox News' Special Report, revealed that Joint Task Force Guantanamo segmented their detainees into low, middle and high risk and convincingly placed Bin Atef in the high risk category. “…what it means is they believe he is someone who is likely to pose a threat to the US, its interest and allies around the world,” he explained.

Further tightening the tag placed on Bin Atef, Steve Hayes, also a Fox News Contributor, while describing the presence of the former detainees in Ghana as a big deal, said it was not a simple issue. According to him, “This is representative of the kind of transfers and releases that we have seen from the Obama administration and to some extent, from the Bush administration.”

Describing Bin Atef as a “very bad guy”, he was surprised the Government of Ghana swallowed the explanation by the Obama-led administration that he was never involved in terrorism, the reason he was placed in a lower risk category while in detention.

Mr. Hayes discredited the United States' positive account of the background of Bin Atef when he exposed checks by the United States Military Intelligence Officials on him, stating otherwise.

“The last time the US Military Intelligence Officials reviewed his background, they said he was assessed to be a fighter of Osama bin Laden's 55th Air Brigade; he was an admitted member of Taliban; he participated in hostilities against the United States and continued to demonstrate support for extremism and Osama bin Laden.”

He further hinted that the ex-Guantanamo Bay detainee was recruited by terrorist group, Al Qaeda, during which time he trained at their famous al-Qaida al-Faruq training camp and stayed at Al Qaeda guest houses.

“His name was on Al Qaeda documents. He has threatened to kill US citizens…slit their throat,” the political analyst maintained. The picture painted by the Fox News Contributor was the instigation of the labeling of Bin Atef as a high risk detainee by the Joint Task Force located at the detention facility in Cuba.

“He is a high risk to the guards at Guantanamo and certainly, if he were released as high risk, they said, he is likely to pose a threat to the United States, its interest and its allies,” he pointed out.