The Boy Accused Of Blasphemy Who Cut Off His Hand 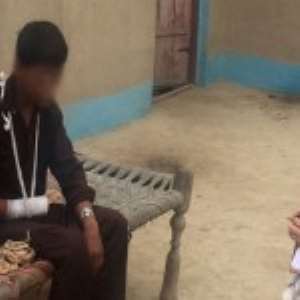 After a Pakistani boy cut off his own hand following a public accusation of blasphemy, BBC Urdu’s Iram Abbasi travelled to his village in Punjab province to find out what happened. She is the first international broadcaster to speak to him. Some readers may find the details that follow disturbing.

“Why should I feel any pain or trouble in cutting off the hand that was raised against the Holy Prophet?”

Those are the words of 15-year-old Qaiser (not his real name) who chopped off his right hand just a few days ago believing he had committed blasphemy.

Many believe fellow villagers starting shaming the boy after the local cleric had made the accusation of blasphemy – and that is why Qaiser felt the need to prove his love for the Prophet Muhammad.

On 11 January, Qaiser was attending a celebration of the Prophet’s birth at a mosque in his village in north-eastern Punjab.

The cleric hosting it worked the crowd into a fervour and, a few hours into the celebration, called out: “Who among you is a follower of Muhammad?” Everyone raised their hands.

He followed it with another question: “Who among you doesn’t believe in the teachings of the Holy Prophet? Raise your hands!”

Qaiser, mishearing, inadvertently raised his hand.
Witnessed by about 100 worshippers, the cleric immediately accused him of blasphemy and the boy returned home to prove his love for the Prophet – by cutting off his own hand.

For a 15-year-old, Qaiser looked exceptionally frail when I met him. But his fight with pain and fear was outweighed by a sense of religious righteousness.

“When I raised my right hand unwittingly, I realised I had committed blasphemy and needed to atone for this,” he told the BBC.

It appears it didn’t matter to him whether it was a mistake or not – he couldn’t live with the shame of the accusation without punishing himself, so had to undo it.

“I came back home and went to the grass-cutting machine, but found the place dark so I took my uncle’s phone to point some light at my hand. I placed it under the machine and chopped it off in a single swirl.”

Qaiser picked his severed hand up from under the machine and, bleeding profusely, placed it on a tray and took it back to the mosque, less than 100 metres from his home. 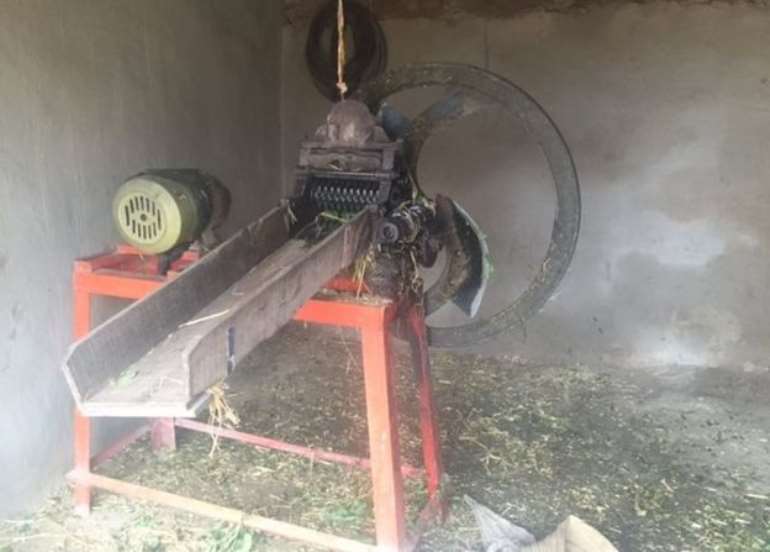 The machine Qaiser used to cut off his hand

The machine Qaiser used to cut off his hand
Asked about everyone’s reaction, he said: “They didn’t say anything. A few people came forward to take me to the hospital, before I passed out.”

.
Religious fervour did not only override empathy among the villagers – even Qaiser does not seem disposed to self-pity.

“I didn’t feel any pain when I chopped it off so why would I feel any now? The hand that commits blasphemy should be chopped off,” he said, with a restrained smile.

His entire village is celebrating the act of expiation. The extreme nature of this “devotional” act has made Qaiser into a revered figure.

He is being heralded among the villagers, and to a certain degree by himself, as a righteous hero. Most of his fellow villagers are illiterate and belong to an extremely conservative Islamic sect – their profoundly religious life is reflected in the mosques you find every few paces in this part of Pakistan. But Qaiser’s act has even drawn admiration from surrounding villages.

Farooq, a man in his mid-thirties, was one of those who came to pay his respects. Appearing at Qaiser’s home, he took the boy’s left hand, kissed it and pressed it against his forehead. Following local custom, he also placed some cash in the pocket of the teenager he hails as a hero.

“I heard that a boy sacrificed his own hand for the love of our Prophet. I came here to meet him.”

“The boy’s gesture to show his love for the Prophet is unmatchable. I’m here to encourage him and to pay homage,” he continued, his eyes brimming with tears of affection.

Qaiser is the youngest of five children and the first to continue his school studies into his mid-teens. He had always been known for his strong religious convictions.

While Qaiser was having his wounds dressed in a poorly-equipped clinic, his father told us: “I hardly make ends meet.”

Breaking down, he added: “I don’t even have money to pay the nurse. I also want a new hand for my son. My only solace is that he did for the Prophet.”

The cleric has been arrested under anti-terrorism laws, and denies charges of inciting hatred and violence. But the family does not want the cleric to be punished.

That Qaiser punished himself so severely after being accused of blasphemy is unprecedented in Pakistan. But some say he may have been spared a worse fate in an increasingly conservative country, where people accused of blasphemy, or those who defend them, can end up victims of mob violence and lynching.

In 2011, Punjab Governor Salmaan Taseer was murdered by one of his own bodyguards in the capital, Islamabad, after criticising Pakistan’s strict blasphemy laws and voicing support for a Christian woman sentenced to death for a blasphemy charge she denies.

Another outspoken critic of Pakistan’s blasphemy laws, Shahbaz Bhatti, the country’s first minorities minister and a Christian, was also shot dead in 2011.

Many will find the story of what Qaiser did to clear his name disturbing but it highlights the extreme sensitivity around the issue of blasphemy in Pakistan.

What may have started as a simple misunderstanding went on to have life changing consequences for a child.

Odododiodoo: ‘Impotent’ Police Cause Of Constant Clashes – ...
30 minutes ago