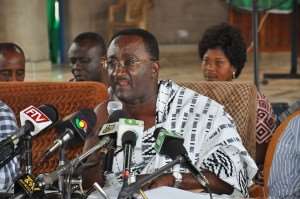 The New Patriotic Party (NPP) Member of Parliament (MP) for Kwadaso Constituency in Kumasi, Dr. Owusu Afriyie Akoto, has stressed that the major key to victory is for the party to ensure vigilance and maximum security at the polling stations during the election period.

The NPP MP observed that whether the Electoral Commission (EC) embarks on compiling a new voters' register or not, the important thing for the NPP to do is to ensure protection and prevent the National Democratic Congress (NDC) from perpetuating fraud and stealing at the polling stations during the polls.

According to him, the question of whether there will be a new voters register or not was immaterial to the party's chances of achieving victory, stressing that the focus should be on how to prevent the high level of malpractices that were exposed during the 2012 election petition.

Sharing his thoughts on the decision by the EC not to do a new register, and how that can affect the NPP's chances moving forward, Dr. Owusu Afriyie said the secret to victory was for the party to protect the ballot and ensure that the NDC do not perpetrate their fraud.

“We were all privy to the outcome of the Supreme Court Petition, and how the NDC and their cohorts allegedly manipulated the processes to their advantage. For me, that is the main thrust of the issue. If we are able to prevent fraud or minimise its occurrence at the polling station during election day, there is no way the NPP will lose,” he observed.

The NPP legislator asserted that evidence from Talensi, and the recently held Amenfi West by-elections, clearly indicate how the NDC had over the years manipulated the electoral processes to their advantage.

“The Amenfi by-election has been able to expose the NDC and how they have over the years cheated their way to victory; we all saw how their figures dropped significantly because we decided to be vigilant and not allow them to steal,” he said.

He, therefore, pointed out that the decision by the EC would not have any bearing on the chances, emphasising that even if the EC had decided to grant the request of the NPP, that will not grant the party automatic victory if the security of the ballot is not protected.

“I want to urge all party supporters not to feel disturbed at all because the EC did not grant the NPP request, because, as far as the party is concerned, our strategy does not only hinge on a new register,” Dr. Owusu Afriyie observed.

POLLNG STATION-BASED CAMPAIGN
Dr. Owusu Afriyie said with the right strategies and tactics, both the EC and the NDC cannot do anything to prevent the NPP from winning the elections. The Kwadaso MP said it was for this reason that the NPP had decided to draw lessons from previous experiences, and would adopt a different approach in the upcoming polls.

Though the MP stopped short of giving details of the said strategies, he said the party would implement a decentralised campaign, where the grassroots executives would be made to take charge of affairs.

He further pointed out that the calibre of polling agents would also be upgraded, explaining that high calibre professionals would be assigned the duty to act as polling agents during the day of the elections, so that some petty mistakes would be avoided.

DONE DEAL MENTALITY
The NPP MP also underscored the need for party supporters and footsoldiers to do away with complacency, stressing that the era whereby supporters think the party can win elections because of the incompetence of the NDC, must be a thing of the past.

“We need to change our mentality towards elections; that it's a done deal, it's a done deal mentality must be avoided. We must all work hard and refrain from being complacent, because it's the only way we can achieve victory,” he advised.

ASHANTI 80% TARGET
Dr. Owusu Afriyie said he was very optimistic about the party's chances of achieving the 80% target in the upcoming election, a feat which the NPP believes, will propel Nana Addo.

According to him, with the comprehensive adherence to the polling station-based campaign, and proper motivation at the grassroots, the NPP would be able to secure the voting target.

He cited, for instance, that constituents in Kwadaso and Bekwai managed to secure more than 80% percent of the total votes because of comprehensive local campaign programmes, and suggested that such strategies must be transferred into the regional front, in order to enhance the party's chances.