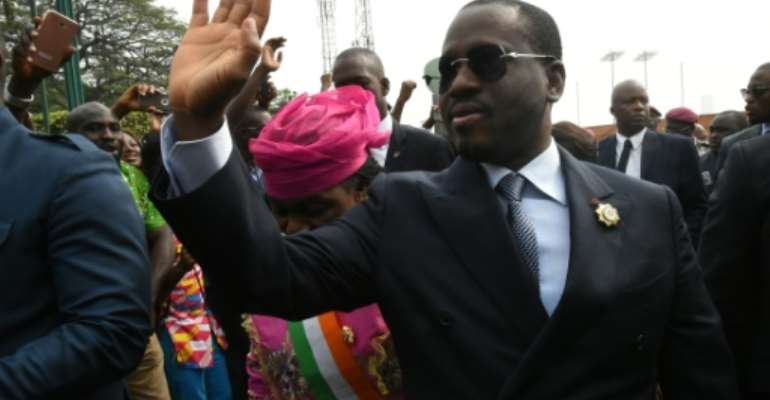 Ivory Coast's parliamentary speaker Guillaume Soro, pictured on December 18, 2015, was a leading figure in the 2011 low-level civil war in Ivory Coast which split the world's top cocoa producer in half. By Sia Kambou (AFP/File)

Abidjan (AFP) - Ivory Coast on Monday rejected an international arrest warrant issued by neighbouring Burkina Faso for the speaker of parliament, calling in a statement from the presidency to solve the dispute through diplomatic channels.

The warrant for Guillaume Soro, a former Ivorian rebel leader and prime minister, was issued on Friday over a short-lived coup last year following telephone wiretaps.

Soro was a leading figure in the 2011 low-level civil war in Ivory Coast which split the world's top cocoa producer in half. He was accused by partisans of then Ivorian president Laurent Gbagbo of being backed by Burkina Faso's Blaise Compaore, a charge the rebels denied.

According to the telephone taps the two men allegedly discussed backing a week-long coup in September in which elite soldiers seized power and briefly took Burkina Faso's interim president hostage.

Abidjan "is shocked that this (warrant) ... was issued with disregard of the rules and customs in this area", the Ivorian presidency said.

Ivory Coast will seek to "solve this issue through diplomatic channels, respecting the agreements that bind us," the statement added.

The putsch in Burkina Faso on September 17 was staged by crack troops from a presidential guard loyal to former head of state Compaore, who was ousted in a popular uprising 2014.

The operation was thwarted by street protesters and support from the army.

In a separate development, Burkina Faso was again reeling this week after jihadists staged a deadly attack on Friday night in the capital Ouagadougou that left at least 29 dead, around half of them foreigners.