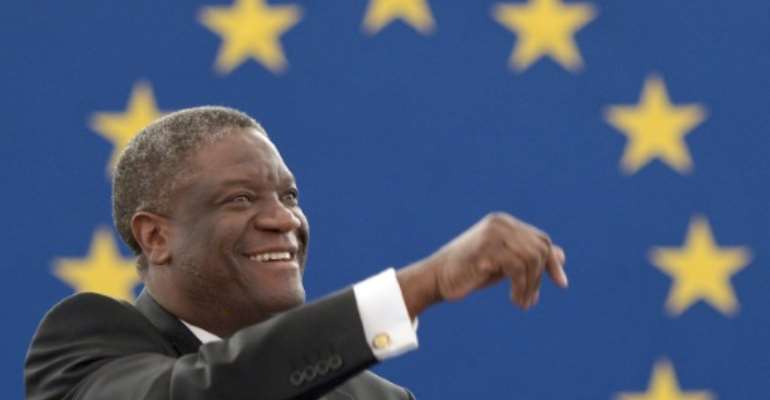 Dr. Denis Mukwege, seen in France on November 26, 2014, is the subject of the film "The Man Who Repairs Women". By Florin Frederick (AFP/File)

To the "relief" of its Belgian director Thierry Michel, "The Man Who Repairs Women" was shown to the press Monday before showing from Tuesday in the capital, its first screening since a one-off, late-night TV showing in October.

The film documents Mukwege's efforts to repair the physical and psychological scars of women shattered by the sexual violence of troops and militia groups in the troubled east of DR Congo.

It hit European screens in 2014 and was supposed to show in DR Congo in September but was banned on the grounds it sought to "tarnish" the image of the Congolese army.

"I am relieved that after (the film's release) globally we can now show it in Congo," Michel told AFP in Kinshasa.

In mid-October, Kinshasa relented and allowed national television to broadcast the work, albeit late at night.

The film follows 60-year-old gynaecologist Mukwege in the Panzi Hospital he founded in 1999, and which he has run in the South Kivu city of Bukavu while operating on several rape victims each day.

Rival forces fighting for control of the vast mineral riches in eastern DR Congo have used mass rape for decades to terrorise the local population into submission.

"Women's bodies have become a true battlefield and rape is being used as a weapon of war," Mukwege said last November in accepting the European Parliament's Sakharov human rights prize.