W. Africa to 'fight back' as Burkina hotel gunmen named 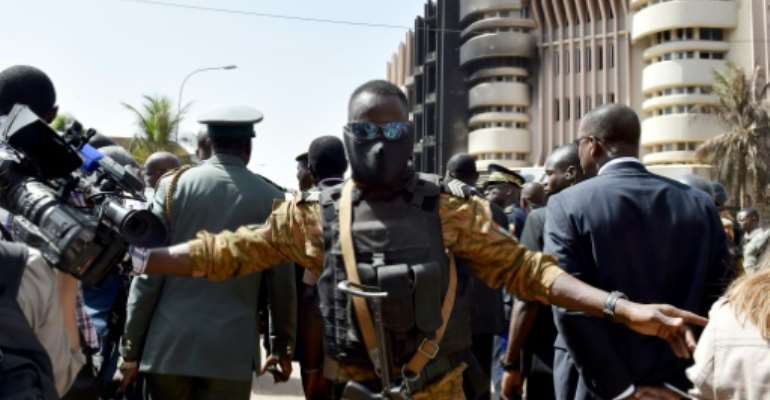 A police officer stands guard during a visit by Burkina Faso's and Benin's presidents to the Splendid hotel and the Capuccino cafe on January 18, 2016 in Ouagadougou. By Issouf Sanogo (AFP)

Ouagadougou (AFP) - Al-Qaeda in the Islamic Maghreb (AQIM) Monday named three gunmen behind a deadly attack on a top Burkina Faso hotel that has highlighted the growing reach of jihadist groups in west Africa, as French police joined in the probe.

Burkinabe troops fanned out across the capital, Ouagadougou, with security stepped up at key sites as visiting Benin President Thomas Boni Yayi pledged that west African nations would fight back against a mounting terrorist threat.

A source close to the investigation said 20 people were arrested on Sunday and Monday in connection with the attack overnight Friday which left 29 people dead, around half of them foreigners.

Some of those were later released, the source added.

Boni Yayi, speaking on behalf of the 15-member Economic Community of West African States, said; "We're not going to just sit on our hands. We will react and respond".

"The question is whose turn is it next," he added.

He spoke as details emerged about a delayed, ill-equipped response from Burkina Faso's security forces, which have been weakened by the nation's political tumult.

Twenty five of the 29 victims have now been identified, public prosecutor Maiza Sereme told AFP, confirming that six Canadians and eight locals were among the victims.

The US State department has said an American also died.

One of the foreign victims was said to be a nine-year-old child.

French President Francois Hollande spoke by phone on Monday with his Burkinabe counterpart Roch Marc Christian Kabore, pledging "any assistance needed ... for a proper investigation of these heinous acts."

The first such incident in Burkina Faso, it came weeks after jihadists claimed an assault on a top hotel in Bamako, capital of neighbouring Mali, that killed 20 people.

At the Ouagadougou crime scene, an 18-strong team of French investigators, including forensic experts, joined local police in white coats combing for clues at the Splendid hotel and Capuccino cafe stormed by the gunmen.

In a statement carried by US-based monitoring group SITE, AQIM said the Splendid Hotel was "one of the most dangerous dens of global espionage in the west of the African continent."

The operation was claimed by AQIM in the early hours of Saturday morning while the attack was still ongoing.

In their earlier statement, AQIM said the gunmen were from the Al-Murabitoun group of notorious Algerian extremist Mokhtar Belmokhtar.

Authorities in Burkina Faso have said that the bodies of three assailants had been identified, but several witnesses said they saw more than three attackers and a manhunt is still under way for accomplices.

Until recently Burkina Faso had largely escaped the tide of Islamist violence spreading in the restive Sahel region and the hotel assault will heighten fears that jihadist groups are casting their net wider in west Africa.

Witnesses said security forces waited hours before taking action against the attackers, with the first on scene poorly equipped.

"Our men were raring to go. We were trained for this," said a gendarme military police source. "We had equipment issues. No night vision goggles, no bulletproof shields, no door breaching tools."

The elite presidential guard unit, which had a well-equipped and trained anti-terror squad, was disbanded after a coup attempt it staged in September.

Additionally, after the failed putsch the authorities jailed the unit's commander, General Gilbert Diendere, who led the nation's intelligence services.

Previously the spying operation had plenty of resources and had provided intelligence to various countries, including France, during attacks and kidnappings across the region.

The attack began around 7:45 pm (1945 GMT) on Friday when the attackers stormed the 147-room Splendid Hotel in the heart of Ouagadougou.

The hotel and surrounding area became a battleground as Burkina Faso troops, backed by French forces based in the city under a regional counterterrorism initiative, launched an attempt to retake the hotel around 2:00 am.

In a reminder of the fragile security situation, an elderly Australian couple were kidnapped on Friday in Burkina Faso's northern Baraboule region, near the border with Niger and Mali.