Yakubu knew about the Ya Na plot 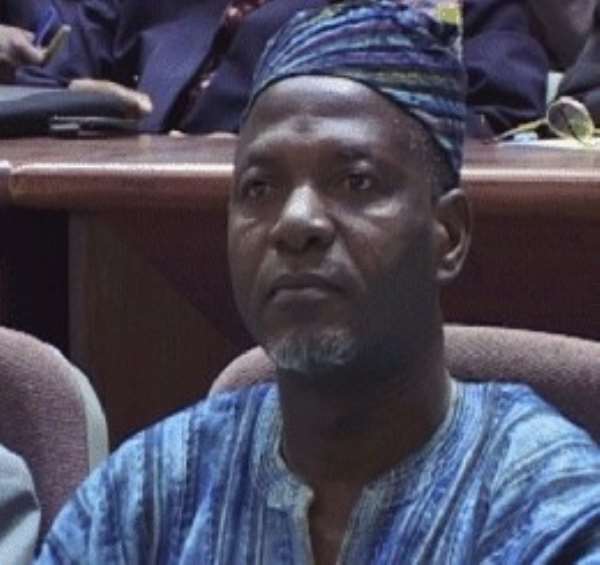 ....and did nothing about it Lens -- Alhaji Malik Yakubu Alhassan must be wondering if he took the right decision when he recently accused President Rawlings of being responsible for the killing of the Ya-Na because his warnings caused the Ya Na to refuse to cooperate with the official security agencies.

A few days after that interview, it has emerged that Malik Yakubu knew from the word go about the plot on the life of the Ya Na but failed to lift a finger to help the embattled overlord of Dagbon.

Alhaji B.A. Fuseini brought these revelations to the fore last Saturday, on Radio Gold's Alhaji Alhaji current affairs programme. A.B.A. Fuseini known for his fearless and bold stance on issues stated that Malik Yakubu, MP for Yendi and former Interior Minister was not being truthful to the people of Ghana. He stated that an incident occurred on the 24th March 2002, at the time that the initial armed attack was launched on the Gbewa palace. It would be recalled that the full-scale attack occurred for three days between the 25th and 27th March 2002.

A.B.A. Fuseini declared that at about 7.45 pm on 24th March 2004, he received a call from Yendi informing him that the Gbewa Palace had just come under attack. Based on the reports, he immediately called Malik Yakubu and related the information to him and pleaded with him to use his high office to avert the looming disaster.

According to A.B.A. Fuseini, he was shocked when Malik Yakubu replied him that the reports were absolutely baseless and are the work of mischievous elements.

Malik Yakubu did not stop there. A.B.A. Fuseini explained that Malik Yakubu went ahead the following day to cause a statement to be issued warning those he described as mischievous elements peddling falsehood about the situation in Yendi to desist or be ruthlessly dealt with by the security agencies.

The following day, the Secretary to the Ya-Na called Joy Fm and explained that the Gbewa palace was under serious attack. Not long after that, the deputy of Malik Yakubu, Asiedu Affram, went into the Joy Fm studios to categorically denounce as lies all that the secretary to the Ya-Na had stated.

It will be recalled that the IGP at the time was also on air at the time declaring emphatically that he had just come from the North and everything was calm and that he was in regular touch with his men on the ground and could affirm that there was nothing awry about the situation in Yendi.

All these official denunciations from Malik Yakubu and the men under him were being made at the time that there was serious gun assault on the Gbewaa palace, in broad daylight within the vicinity of both the Police and the military stationed in Yendi to restore calm.

ABA Fuseini asked whether Rawlings' warning to the Ya Na was the reason why the security agencies failed to intervene for the three clear days that the palace was under armed attack. He intimated that under normal circumstances, the security agencies would have been made to be more alert in order to prove that the former President's warnings to the Ya Na had no basis.

He also wondered why up till now no investigations had been conducted into the mysterious circumstances that led to the inability of the stationed armored vehicle to move to the defense of the palace. Most Ghanaians have all along known that the official reason of faulty battery is nothing but a coq and bull story that flies in the face of common sense.

While Malik Yakubu is desperately pointing one accusing finger at President Rawlings four of his other fingers are pointing back at his own complicity in that whole episode. Up till now, he has not been able to explain, how soon after the call to Joy Fm by the secretary to the Ya Na, all telephone lines to and from Yendi were suddenly cut. He has not been able to explain why days preceding the killing of the Ya Na, all barriers throughout the country were mysteriously removed. Worse still is his inability to explain why he claimed Yendi was calm when all along he knew that the palace of the Ya Na was under attack which fact is corroborated by that authentic intelligence reports sent to him and others at the time.

A.B.A. Fuseini traced Malik Yakubu's inaction way back to the Eid ul Fitri celebrations at the close of the previous year. A.B.A. recalled how a certain Aminu Amadu on the instructions of the Boli Lana paraded himself as Zohe Liman (spiritual leader), and was seen riding a horse and was fully turbaned. This act of extreme provocation to the authority of the Ya Na was fully supported by Malik Yakubu Alhassan, since he was never heard condemning it and the police were there to protect the impostor, Aminu Amadu.