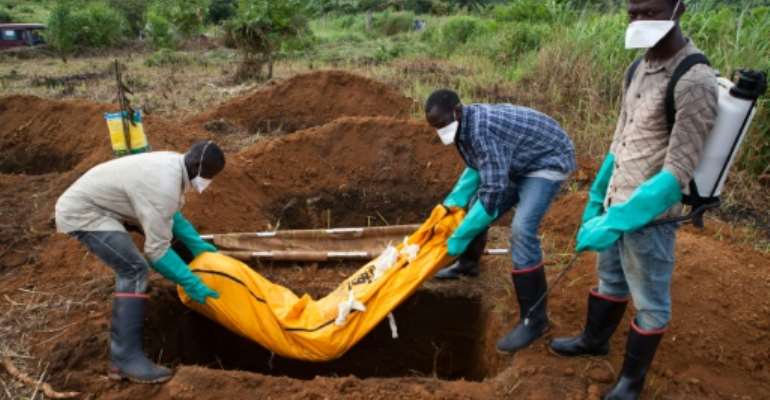 Volunteers in protective suits burry the body of a person who died from Ebola in Waterloo, Sierra Leone, on October 7, 2014. By Florian Plaucheur (AFP/File)

Freetown (AFP) - Sierra Leone's government on Saturday urged the public not to panic as it announced that more than 100 people had been quarantined following a new death from Ebola just as the country seemed to have overcome the epidemic.

The World Health Organization on Friday confirmed that a 22-year-old woman who died after falling ill near the Guinean border last week had tested positive for the tropical fever.

The announcement came a day after west Africa was celebrating the end of the outbreak after Liberia became the last of the three worst-hit countries in the region to be declared Ebola-free. Sierra Leone had received the all-clear last November, and Guinea in December.

Health officials in Freetown said they had placed a total of 109 people who had been in contact with the student before her death in isolation.

Of those, 28 were considered "high risk" and three contacts had yet to be located, Ishmael Tarawally, the national coordinator of the Office of National Security, said at a press conference.

"We are worried and concerned about this new development but call on the general public not to panic and more than ever before, all Sierra Leoneans must work together to prevent further infection," he said.

The woman died in the northern Magburaka township in the district of Tonkolili but Tarawally said "active case investigations" were ongoing in all the districts where the victim was known to have recently travelled.

Those include the districts of Kambia, Port Loko, Bombali and Freetown.

"The source of infection and route of transmission is being investigated and the government urges all Sierra Leoneans to continue being vigilant," Tarawally added.

The country's chief medical officer, Dr Brima Kargbo, said that when the woman arrived at Magburaka Government Hospital she showed "no signs or symptoms that fitted the case definition of Ebola".

"She had no fever or redness of the eyes when she was examined at the outpatient ward. What was detected was dizziness. We are now going to revisit the Ebola case definition," he added.

The Ebola outbreak, which began in Guinea in December 2013, killed more than 11,000 people and was the deadliest outbreak of the virus yet.