Aguddey gains most in 'Prez Debate' 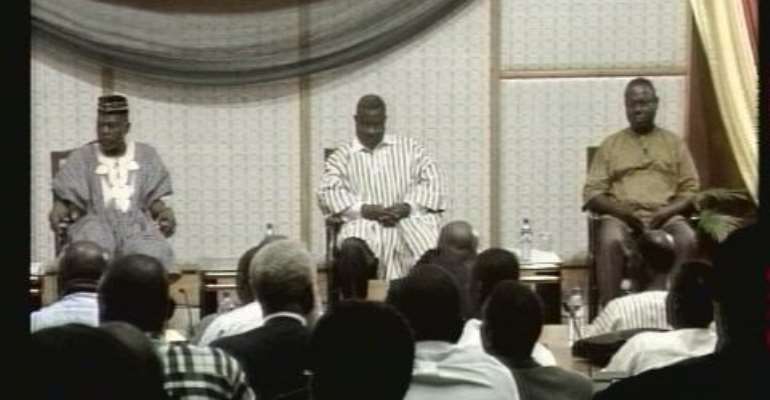 Accra, Nov. 17, GNA - Ghana News Agency survey on the "Presidential Debate" showed that Mr George Aguddey of Convention People's Party (CPP) gained most since many had not heard him prior to the debate and had, therefore, underestimated him.
Mr Aguddey said among other things that a government under his leadership would take a second look at the repealed Criminal Libel Law to protect the privacy of Ghanaians when elected in Election 2004. He said the media should move its focus on the private affairs of individuals to deal more with issues affecting the development of the country.
"I believe citizens must be given the chance to seek redress when their reputation is harmed without fear or favour," he said. Many of those interviewed randomly saw the Presidential Candidate of the National Democratic Congress (NDC), Professor John Evans Atta Mills as being at his professorial best as was expected.
His intention to continue with the projects of the New Patriotic Party (NPP) when elected made the most impression on the audience. The Grand Coalition Candidate Dr Edward Mahama's free education policy was the most often cited as being very agreeable.
Generally those interviewed saw the exercise as a plus for Ghana's fledgling democracy but were not very much satisfied with some of the answers.
Some of them said the answers were indicative of the fact that Ghanaian politicians always wanted power before they prepared to deal with the issues.
They said the questions, drawn from professional bodies such as the Ghana Bar Association (GBA), Ghana Registered Nurses Association (GRNA), Ghana National Association of Teachers (GNAT), National Union of Ghana Students (NUGS), Ghana Medical Association (GMA) and others, were good but the candidates failed to provide concrete answers that would give hope to the populace.
Mr Sallia Fawundu, UNDP Resident Coordinator, told the Ghana News Agency that the debate was a healthy sign that Ghana's democracy had come of age.
"It is pertinent to see leaders of political parties think about the future and welfare of the citizens, whose mandate they are seeking to rule," he said.
Dr Edmund Delle, Chairman of the CPP, said the debate was very open and provided Ghanaians the opportunity to hear the vision of those seeking to lead them.
"From what transpired Ghanaians can form their own opinion about events, judge each candidate on merit and decide on who will meet their expectations," he said.
Mr Bede Ziedeng, Deputy General Secretary NDC, said the process was transparent and well run.
Rev Dr Fred Deegbe, General Secretary Christian Council of Ghana, who moderated the debate, said it was good to see the Presidential Candidates telling the audience how they would conduct the affairs of the country when it was entrusted to them after the December Elections.
"I am satisfied that it passed off so well. It is good that the questions dealt with most of the issues on the minds of Ghanaians," he said.
Mrs Jean Mensa, Administrator of IEA, said the Institute would institutionalise the debates as part of the country's democratic culture.
The 'Presidential Debate' was organized by the Institute of Economic Affairs (IEA) in collaboration with three of the political parties taking part in Election 2004.
Three out of the four political party candidates vying for the presidency with the exception of the NPP Candidate, President John Agyekum Kufuor took part in the debate.
The Presidential Candidates of the NDC; People's National Convention (PNC) or the Grand Coalition and the Conventions People's Party (CPP) took turns at the two-hour session to answer questions on the economy, good governance and the social sectors.