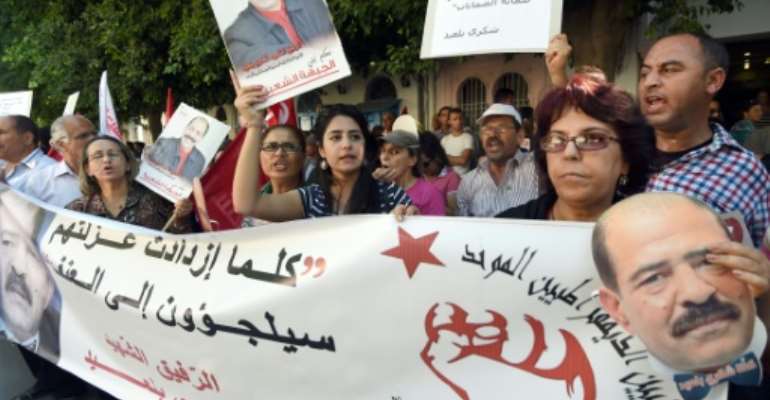 Tunisian demonstrators in front of the court in Tunis on June 30, 2015, during the trial of 24 people accused of the assassination of opposition leader, Chokri Belaid. By Fethi Belaid (AFP/File)

Tunis (AFP) - The trial of 24 Tunisians accused of the 2013 murder of prominent opposition leader Chokri Belaid was adjourned Friday, as some of the defendants alleged they had been mistreated in detention.

"The judge decided to delay the trial until March 15 and agreed to free one of the accused according to a demand from his lawyer," Kamel Barbouche, spokesman for the attorney general, told AFP.

The legal team of Belaid's family had called for proceedings to be delayed, citing "new material" for the trial, one of the defence attorney's, Ali Kalthoum, said.

The prosecutor also had requested an adjournment saying more time was needed -- 20 days to a month -- to complete the investigation.

Belaid, who was gunned down outside his home on February 6, 2013, was a staunch critic of the then ruling Ennahda party, a moderate Islamist group.

Authorities pinned the blame on jihadists and a year later said they had killed Belaid's alleged murderer.

Only 17 defendants appeared in court on Friday -- others refused to be present in protest over what they said was their ill treatment while in prison, according to lawyer Rafik Ghak.

One of those present at the hearing, Riadh Ouertani, compared the Mornaguia prison where the defendants are being held to the US detention facility at Guantanamo Bay.

"It's two and a half years since I went to prison and they beat me morning and night," he told the court.

Speaking to AFP, prisons spokesman Kais Soltani denied that the detainees had been mistreated or tortured, accusing them of seeking the "pity of the judge".

Extremists linked to the Islamic State group claimed to have killed Belaid and another opposition member, Mohamed Brahmi, in July 2013, but Belaid's family says there are "grey areas" in the investigation.