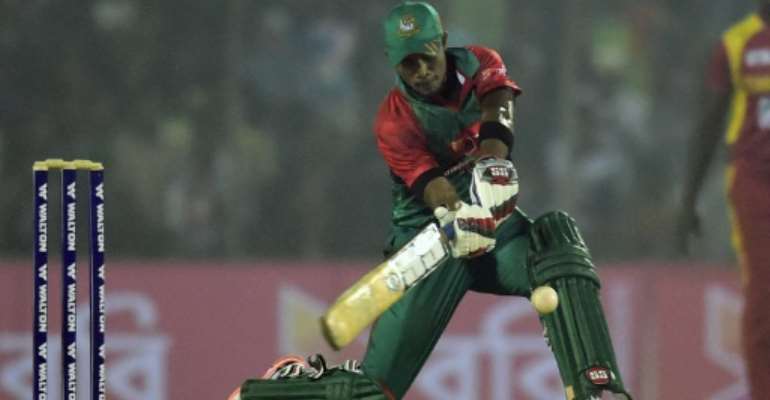 Bangladesh batsman Sabbir Rahman topscored for his side with 46 runs as they beat Zimbabwe in the first Twenty20 in Khulna on January 15, 2016. By Munir Uz Zaman (AFP)

Khulna (Bangladesh) (AFP) - Bangladesh batsman Sabbir Rahman was the top scorer for his team with 46 runs as the hosts edged Zimbabwe by four wickets in the first Twenty20 international in Khulna on Friday.

Set a decent target after Zimbabwe were restricted to 163-7, Bangladesh comfortably reached 166-6 with eight balls in hand to take 1-0 lead in the four-match series.

Zimbabwe made regular breakthroughs but could not stop the run flow as Tamim Iqbal (29), Mushfiqur Rahim (26) and Shakib Al Hasan (20 not out) all made decent contributions to Bangladesh's victory.

Sabbir faced 36 balls and hit four boundaries and a six, taking advantage of a dropped catch by Vusi Sibanda off Sean Williams when he was on 36.

"It was a clinical performance," said Bangladesh captain Mashrafe Mortaza. "Tamim was calm, Sabbir was brilliant, and Shakib finished it off.

"At one stage, they looked to score 170-180, but the way Mustafiz (Mustafizur Rahman) and Al-Amin (Hossain) bowled was brilliant."

Earlier, Hamilton Masakadza and Sibanda put on a record 101-run opening partnership for Zimbabwe after skipper Elton Chigumbura won the toss and opted to bat first at the Sheikh Abu Naser Stadium in Khulna.

Masakadza hit 79 off 53 balls, equalling his own national record for the highest individual innings, while Sibanda struck 46 off 39.

Bangladesh did well to restrict Zimbabwe in the final few overs, despite Masakadza and Sibanda breaking the team record, set by Sikandar Raza and Chamu Chibhabha's 100-run partnership against Afghanistan in October.

Bangladesh had to wait until the 12th over for their first breakthrough when Sibanda was finally caught at square leg by Tamim off Shakib's delivery.

Shakib dropped Masakadza on 73 off Mustafizur Rahman, but debutant wicketkeeper Nurul Hasan ensured it did not cost the team much by ending his innings six runs later with a brilliant throw for a run out.

"I thought I could have put a few more runs on the board," Masakadza said after the game.

"I should have made sure I have stayed till the end."

Shortly thereafter, Rahman bowled Chigumbura and Luke Jongwe off consecutive balls to finish with 2-18, before Al–Amin Hossain grabbed two wickets in the final over.

Zimbabwe had to settle for a relatively modest score, picking up just 21 runs for five wickets in the last four overs.

The second match of the series will be held at the same ground on January 17.