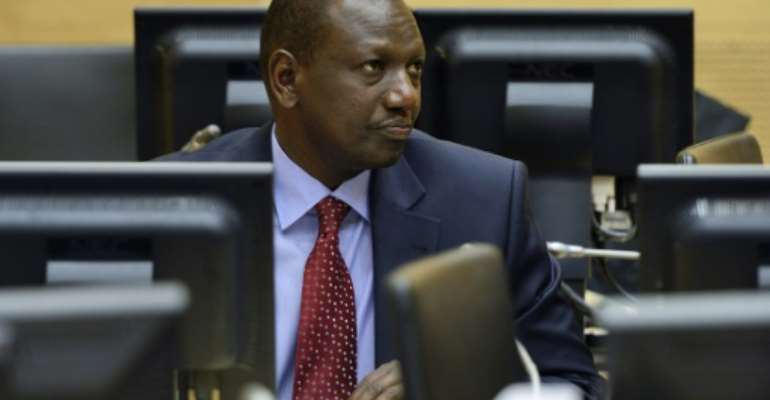 The Hague (AFP) - Lawyers for Kenya's Deputy President William Ruto Thursday urged the International Criminal Court to drop a crimes against humanity case against him, saying prosecutors had failed to prove his role in post-polls bloodshed.

"The evidence is palpably missing," Karim Khan told a three-judge bench at a hearing to assess whether Ruto has a case to answer for his alleged role in the violence in 2007 and 2008.

Prosecutors say more than 1,300 people died and 600,000 were left homeless in the worst unrest in the east African powerhouse since independence from Britain in 1963.

Ruto, dressed in a dark suit, light blue shirt and yellow tie, listened intently, smiling at times, as Khan presented his arguments in The Hague.

"One of the main characteristics... is that the key elements on which this case has been based have disappeared," said Khan.

For instance, at an ICC hearing in September 2011 to determine whether Ruto should face trial, prosecutors alleged he had attended at least 11 meetings to set up a criminal network to carry out the violence.

But no proof was presented during Ruto's trial that such planning meetings ever took place, Khan said.

"We say there was no organisation, no network, no guns."

He played a number of video recordings made around the polls showing Ruto repeatedly calling for peace and unity.

"Like we said at the beginning of the trial -- even if one dresses this case up in its Sunday best it's still in tatters," he said, urging the judges to "dismiss the case".

Violence broke out in Kenya after opposition chief Raila Odinga from the Luo ethnic group accused then president Mwai Kibaki, from the Kikuyu ethnic group, of rigging the elections.

What began as political riots quickly turned into ethnic killings of the Kikuyu people, who in turn launched reprisal attacks. The violence ended when Kibaki and Odinga agreed to share power, with Odinga as prime minister.

Both Ruto and Sang reject the accusations and last year their lawyers filed a request for the world's only permanent war crimes court to drop the charges as there was "no case to answer".

Prosecutors closed their arguments in September 2015 and the defence's case is yet to start.

Judges are set to rule on the request at a later stage and may still deny the defence application, meaning the case would continue.

That announcement was the ICC's biggest setback since it was established in 2002, and came amid allegations of witness intimidation, bribery and false testimony.

Kenya has fought an international campaign against the cases and has led African accusations that the ICC is unfairly targeting the continent's leaders.