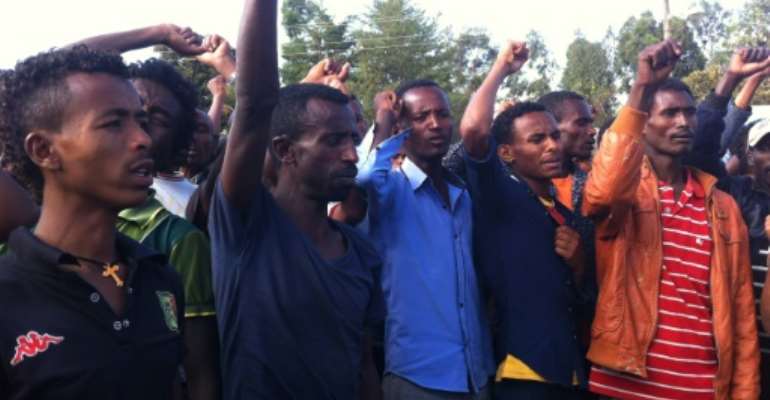 Human Rights Watch said last week that at least 140 people had been killed in Ethiopia over two months in a crackdown on anti-government protests sparked by the plan to expand the capital into farmland areas. By Justine Boulo (AFP/File)

"OPDO (...) ruling party of Oromia region has decided to abandon the project between Addis Ababa and Oromia ... because its own people have been asking questions and protesting," said communication minister and government spokesperson Getachew Reda said.

Human Rights Watch said last week that at least 140 people had been killed in Ethiopia in two months in a crackdown on anti-government protests sparked by the plan to expand the capital into farmland.

It said the protests "may be the biggest crisis to hit Ethiopia since the 2005 election violence".

The number reported by HRW was almost double the previous toll of 75 the group gave in December.

The Ethiopian government had put the death toll at five.

The protests began in November when students opposed government proposals to take over territory in several towns in the Oromia region, sparking fears that Addis Ababa was looking to grab land traditionally occupied by the Oromo people, the country's largest ethnic group

The government spokesman said Wednesday that "OPDO decided to stop the project".

"The plan was never to expand Addis Ababa to Oromia but to coordinate the development efforts of Addis Ababa and surroundings towns around Finfine region," he said.

With at least 27 million people, Oromia is the most populous of the country's federal states and has its own language, Oromo, distinct from Ethiopia's official Amharic language.

Akufo-Addo to launch ‘Operation Clean Your Frontage’ in Accr...
4 minutes ago

Retract and apologise your derision, disrespect, and condesc...
6 minutes ago