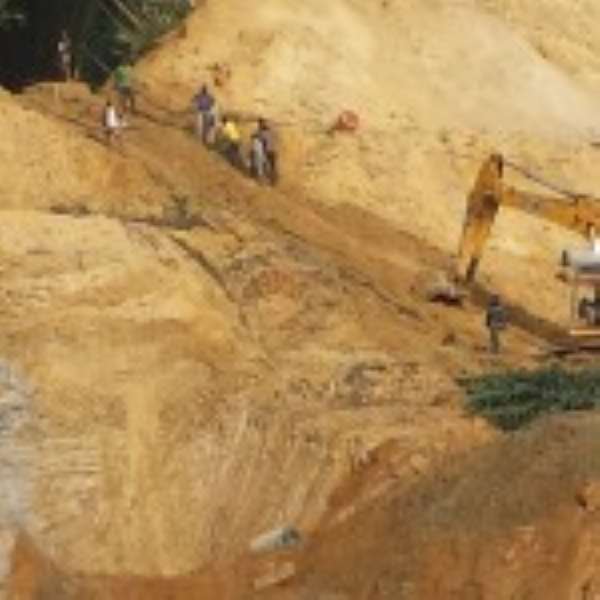 The increased rate of galamsey activities within Prestea and its surrounding areas is generating tension, especially between the Miners Association and the District Police Commander on one hand and the concession owners on the other.

As a result of the development, concession owners are said to be facing tough times dealing with the 'so-called' Small Scale Miners Association members who have virtually pushed them to the peripheries.

In the equation, the Prestea District Police Commander has been accused of taking over concessions that belong to other people who are not necessarily members of their association.

Speaking to some people whose concessions have been encroached upon by the association, they lamented that the situation is worrying since the association only destroys their lands in the process.

They also averred that the association and the District Police Commander appear to be unconcerned as the situation is worsening.

.
With their activities and their attendant effects on the land and the community as a whole, the Minister of Lands and Natural Resources, who was in the community, caused the seizure of equipment and machines belonging to the association's members, which were being used to mine.

However, this paper has gathered that a few days after the seizure of the machines, members of the association have returned to their ways.

Members of the Small Scale Miners Association in Prestea held a press conference and accused the Minister and the Minerals Commission of teaming up with legitimate concession owners to seize their equipment.

Two persons, Fosu and Lion, known galamsey operators, are on bail after their arrest by the Police, apprehension which has caused confusion in the area especially after the threat by the youth to kill concession owners.

Concession owners are thus calling on the Minister, Minerals Commission and the IGP to look into the activities of the association and asking the District Police Commander to stay away from their lands.

A visit to Prestea has established that the association members and other small scale miners  use mercury to extract gold, a practice which degrades the environment.

Although government has not regulated the use of mercury by small scale miners, the association continues to use it to the detriment of the people and the community.