My Records Will Speak On Nov 7 — President 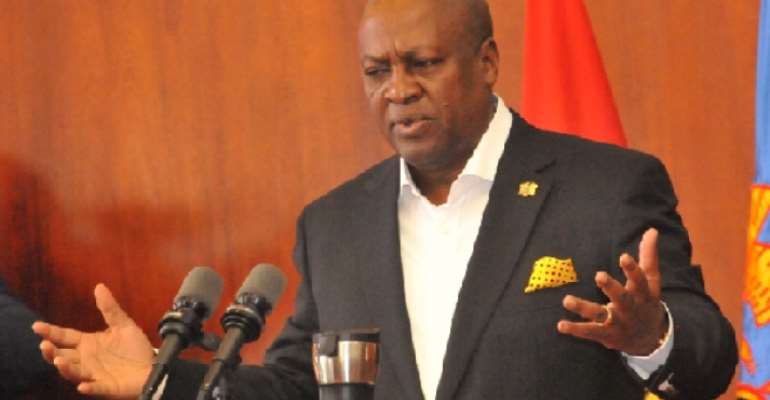 President John Dramani Mahama yesterday mounted a strong defence of the tremendous achievements of his administration, saying Ghanaians would judge him accordingly in the November 7 elections.

Speaking at a news conference to mark three years of his Presidency at the Banquet Hall of the Flagstaff House, he explained that his fundamental position was that he had done his best, sometimes under trying circumstances, to bring Ghana thus far.

Appearing psyched up for the occasion, Mr Mahama stood on his feet for nearly three hours to answer a wide range of questions that had dominated public space in areas including politics, the economy, security, education, health, good governance and infrastructure.

One key area where the assembled journalists failed to touch was sports.

With ministers and other key appointees, as well as leaders of the ruling National Democratic Congress (NDC), present to listen to proceedings, the stage was set for a major scrutiny of the Mahama administration by the about 200 journalists in the hall.

The President deviated from tradition, preferring to render his general remarks at the tail end of proceedings instead of at the beginning.

And at the end of it all, he said, “I have answered them honestly, transparently and, most important, in the hope that rather than my responses being an end-of-subject full stop, they will be part of an ongoing discussion among the good people of Ghana, the media, members of my administration and me.”

He said if Ghanaians continued to listen to one another, the unrecoverable divisions in the country would be curbed.

“What I have seen happening too often is people dismissing the viewpoints of others without even listening to what it is they have to say,” he added.

He said although all the people would not have one opinion on how to get Ghana to the expected place of development, it was all clear that “we all want to reach the same destination”.

However, he said, that would not happen overnight, adding that true progress must be sustainable.

Opening question
In response to the opening question on how to curb armed robbery in the country, the President said the government had made many investments in retooling the police to fight crime.

As a result, crime figures had reduced by more than 5,000, thereby improving the safety of the people.

He stated that the taxi driver whose bravery led to the arrest of two armed robbers was to be given a three-bedroom house as a show of gratitude by the government.

Teacher and nurse trainees allowances
When he was asked whether he was aware that his main challenger at the November polls, Nana Addo Dankwa Akufo-Addo, had promised to restore the teacher-trainee allowance which his government had scrapped, President Mahama said, “It is a political contest so everyone wants to undo the other, otherwise this is purely political talk.”

He explained that once the colleges of education had been raised to tertiary standard, it was only logical that the allowances the trainees received were removed and replaced with the Students Loan Trust.

“Enrolment in the colleges of education has increased by 63 per cent since we removed the allowances,” he said to justify the decision to scrap the allowances.

Although the allowances had been removed, the President said, what was refreshing was that the students were still fed three times a day, which could not be found in the other tertiary institutions.

On the delays in employing fresh teachers and nurses, he said it was purely due to administrative lapses which were being addressed.

He again deflated accusations in certain circles that his wife and the government were involved in the saga of the DKM micro-finance company.

Power crisis
The President admitted that the power crisis was not completely over but said “we are close to solving the ‘dumsor’”.

“There is visible improvement,” he said, and expressed the hope that “in the next short while we will be able to overcome the load shedding”.

Giving the reassurance that the Electricity Company of Ghana (ECG) would not be privatised, he said the decision to introduce private sector involvement in the revenue generation of electricity management was to ensure efficiency in the system.