Was The EC Trying To Deceive By Its Statement On The Panel Report? 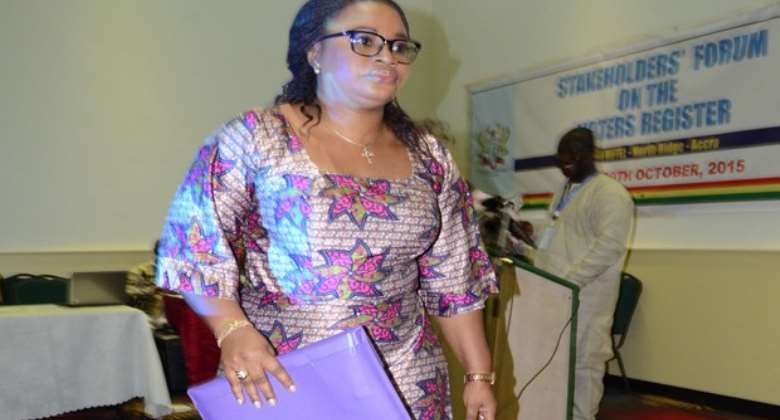 On the last day of December last year, the Electoral Commission issued a statement on the report of the 5-member Panel it constituted to examine issues surrounding the credibility of the Voters Register. That statement sought to create the impression that the Panel was unconvinced by the call for a new Voters Register. This was a palpable lie told by a public body that should be a neutral referee in electoral contests.

The Panel actually did a superb professional job. The least show of gratitude they deserve from the EC was for their report to be accurately represented in that statement.

From the Panel’s report, it examined three issues:

The Panel was quick to dismiss the first question as it was of the view that since new voters had been and would be registered ahead of the 2016 elections, practically there was nothing called the ‘2012’ Voters Register. In other words, the Register that was used for the 2012 elections has been superseded.

Before answering the remaining two questions, the Panel carried out a statistical analysis of its own to assess the effect of some of the sources of bloating. It admitted constraints in finding out the number of foreigners on the register due to the lack of a universal national identification card. It also acknowledged the difficulties faced by registration officers by relying solely on visual appearance to recognise minors (e.g. some 13 year olds may be made up to appear to be over 18 years).

The report then went ahead to present the findings of the analysis, preceded by the following observation:

“There is some evidence that the Register of Voters possibly contains a substantial number of names of people whose records are currently not valid. By all indications, the number of registered voters is not only unusually high, but it may be in excess of the potential number.”

First the Panel found that there may be 150,000 more people on the 2012 Voters Register than the potential number. This was based on the projected population in 2012 of those aged 18 years and above, discounted by number of foreigners. By extending this analysis to cover the limited registration of 2014, this number grew to 158,000. With no means of ascertaining the number of foreigners on the Register, the Panel assumed these may all be minors.

The second finding from the analysis was with regard to the number of dead persons whose records need to be removed from the Register. Here too, by using projections available from statistical records, the Panel estimated that there might be 580,000 dead persons on the Register, if not removed by the time of the 2016 elections.

The Panel also considered the presentations made by the various organisations that met at the forum. It did place more weight on the presentations by organisations and individuals that were not aligned to political parties. The Panel took seriously the observation by Dr Wireko-Brobbey that all registers from 1992 have been bloated but it rejected the follow on that things should be left as they are. It is worth quoting what the report said on this:

“If it had been bloated should we continue to have bloated Registers of Voters? The answer is really a big No”.

From just these two sources of bloating mentioned above, the Panel stated that:

“The existence of such margins on the valid records undermines the quality of elections: such as transparency, fairness, validity and reliability of the results.”

It went on to further thus:

“The consequences of a "bloated” register (or numerous invalid records) are not ignorable. Maintaining a Register with so many invalid records has the implications of:

(a) potentially rewarding corrupt practices of not only those who will come to lead the country but also of public servants and those given temporary responsibility of managing the voting system;

(b) the most ingenious wins over the will of the people;

These conclusions were reached by taking into consideration the opportunities afforded by a bloated register to pad the votes and in the light of the following:

With the finding that the Register is bloated, the Panel then examined ways in which the situation can be remedied. It is here that the EC has not been truthful. The Panel was unconvinced by the EC’s own plan to use the challenge procedures specified in CI 72. The Panel considered this approach as having been ineffective. This is what the report says on it:

“ Judging by the sheer numbers, the Electoral Commission's proposition to display the Register, with Political Party representatives, the Electoral Commission and citizenry to identify and point out invalid names, is not a viable approach. Particularly when the persons who identify these records are expected to expend their time, energy and resources not only to provide the evidence but also to testify before a court of competent jurisdiction. The efficacy of the current provisions may be assessed by the fact that in spite of this system having been in place, there were 8,000 registrants in 2014 who may have been minors on the list since 2012.”

“The signal is that the system is not effective in achieving the set goals of eliminating invalid records from the Register and must be reconsidered. It is said that you cannot do the same thing and expect different results.”

With regards to the demand for a new register, the Panel was not explicitly against it and in fact did not address it in any length. The only comment on it is to be found in the recommendations, which appear to consider a wholesale replacement as not cost-effective. There is nowhere in the report where the Panel said that it was unconvinced about the call. It is therefore worrying that the Electoral Management Body will seek to misrepresent a report by a Panel that it constituted itself.

So what were the recommendations of the Panel on whether to clean or replace the register? This is reproduced below:

Generally, it might be difficult to justify leaving more than half a million invalid records in the Register that we seek to characterize as credible. It may be expedient to try to find a middle ground to creating a new register through a completely new registration process.

The Electoral Commission could consider extending the exhibition exercise to have voters confirm their names on the list, an indication that they would want to maintain their voter status.

The benefits include signalling that the Electoral Commission is doing something about the known flaws in the Register; the more cost-effective approach is being used. In the same way that a new registration would have required citizens to physically appear for registration, the cleaning would require that they appear to confirm. The major difference is that they spend less time because no forms are filled.

Rather than make others responsible for maintaining voters' names on the list, the individuals should themselves do that. This also avoids the issue of people looking for documents to support any claim to get a record removed. This is largely what happens with the current system of hoping invalid names would be detected. It would be important to use this opportunity to call on all who are not eligible to voluntarily get their names off without facing any prosecution.”

The Panel is thus recommending, for all practical purposes, a new register using a new registration process similar to what was used in Nigeria before their 2015 elections. This approach weeded out over 4 million people from the Nigerian Register. The only difference, in the case of Ghana, might be that no new voter’s ID card would be issued, unlike Nigeria where new cards with embedded chips were issued upon re-confirmation.

To build up trust, the EC should stop this blatant attempt to deceive Ghanaians. It should cease the charm offensive its Chairperson is currently embarking on. There is real work to be done between now and November 7th. It should rather preoccupy itself with publishing its plans for implementing the Panel’s recommendations and should be getting on with it!