Bottom beginning to fall out of ivory market: regulator 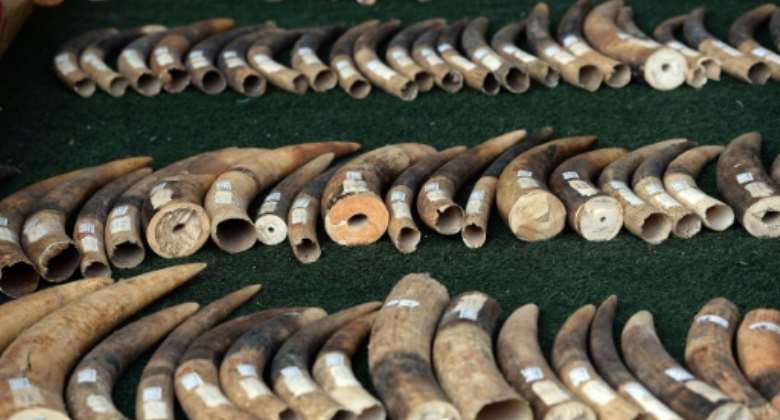 Elephant tusks are displayed by wildlife officials after more than 700 kilogrammes of ivory items were seized on the island of Koh Samui, in Bangkok on December 18, 2015. By Christophe Archambault (AFP/File)

Geneva (AFP) - Global efforts to crack down on illegal ivory trafficking are eating away at prices, a wildlife trade regulator said Tuesday, voicing confidence the bottom was falling out of the market.

"We're seeing the price of ivory start to tank," said John Scanlon, head of the Convention on International Trade in Endangered Species of Wild Fauna and Flora (CITES).

"You're seeing the bottom fall out of the market," he told AFP on the sidelines of a meeting in Geneva this week focused on illegal wildlife trade.

The international trade in ivory has been banned in most of the world since 1989 following a drop in the population of African elephants from millions in the mid-20th century to just 600,000 by the end of the 1980s.

But a vast illegal market still sees some 30,0000 elephants slaughtered in Africa each year.

Organised crime syndicates and rebel militia looking for ways to fund insurgencies in Africa have become increasingly involved in the trade, eager to reap the benefits as demand in Asia for ivory to use in decorations and traditional medicines drives a multi-billion-dollar market.

But in a report published late last year, Kenya-based conservation group Save the Elephants said the price of ivory in China was cut in half over an 18-month period.

China has this year taken steps to reduce both the legal and illegal ivory trades -- although a total ban has not been put in place -- and awareness of the impact of the trade on Africa's elephants is growing among Chinese consumers.

While the gangs behind most of the illegal trade can still make a profit, Scanlon said the slumping prices were sending a clear message.

He said that even more than ivory-coveting end consumers, scrupulous investors speculating in illegal ivory prices were driving the demand, stressing that they were unlikely to keep investing as prices plunge and the risks soar.

Countries across the world have increasingly been cracking down on the illegal trade, dishing out harsher sentences to poachers, middlemen and buyers alike and dramatically increasing efforts to track ivory.

The problem however remains far from solved.

Today, only 450,000 to 500,000 elephants remain in Africa, with the hardest-hit populations in the centre and the west of the continent seeing annual killings that exceed the natural birthrates.

"We are faced with terrifying levels of poaching and illegal trade," Niger's representative Mariama Ali Omar told the CITES conference.

She was among a range of country representatives calling on countries to destroy their ivory stockpiles and urging those that permit the trade of ivory from domestic elephants to "stop it."

"That would help us to bring down demand... (and) bring an end to having domestic trade serve to launder illegal ivory trade," she said.

The Geneva meeting will provide a range of recommendations to be considered at the triennial World Wildlife Conference in opening in South Africa in September.

Set aside the purported rejection of 2022 budget - Majority ...
54 minutes ago

Xavier Sosu fights back, files for stay of execution against...
54 minutes ago