We will asphalt Ho township roads this year - President Mahama 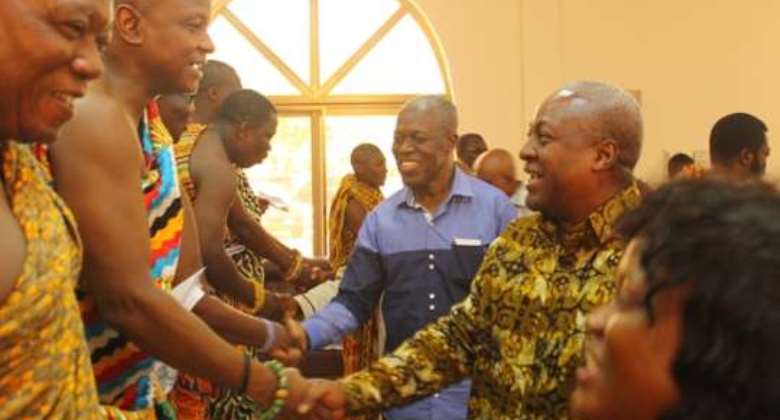 Ho, Jan. 10, GNA - President John Dramani Mahama on Saturday said Ho township roads would be asphalted before the end of 2016.

He said the re-surfacing, which is part of an urban road improvement project, is to improve the state of roads in the regional capital.

President Mahama said this when he paid a courtesy call on Togbe Afede XIV, Agbogbomefia of Asogli State, as part of a three-day presidential retreat in Ho.

President Mahama said the contract for the road project was being awarded and would include Hohoe and Keta township roads.

He said the reconstructed Ho main market would also be commissioned this year.

President Mahama said government was on course in improving the living conditions of the people and urged the citizenry to eschew pessimism.

He said government was closing the gap between energy supply and demand and gave the assurance that the energy challenge would soon be over completely.

Togbe Afede expressed his unhappiness with the quality of work on the township roads and some uncompleted projects in Ho.

He said the chiefs and people of Asogli were aware of the President's commitment to development and that what he needed was a committed team.

Togbe Afede commended the government for re-opening the Adomi Bridge, completion of work on the permanent campus of the University of Health and Allied Sciences and progress of work on the Eastern Corridor road and the Ho aerodrome.