FirstTrust G6 Tourney: Asante Kotoko vs AshantiGold - What you need to know 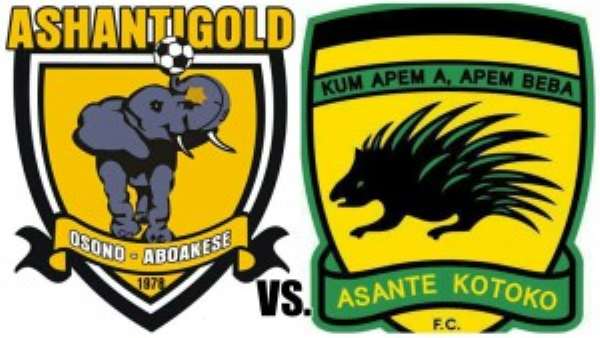 Kumasi Asante Kotoko will be testing their proficiency in front of goal this afternoon against league champions AshantiGold after hitting three past Berekum Chelsea on Friday in the ongoing FirstTrust G6 Tournament.

The Porcupine Warriors are the first side in the tournament to have scored an open goal, capping it with a beautiful performance against the 2011 league champions.

AshantiGold will be looking to free themselves from the Reds after losing to them in the SWAG Cup finals at the Baba Yara Sports Stadium a few months ago.

The Aboakese lads played a goalless draw game with Berekum Chelsea in their opening game in the competition on Thursday.

As the tournament gets interesting and fascinating, our evergreen statistician Nuhu Adam takes a statistical look at this afternoon's encounter.

*None of their last 10 meetings have ended in a draw.

Asante Kotoko wins 4
Ashanti Gold wins 6
*Asante Kotoko recorded most away wins in the GPL last season than any other club.

*The Elephants managed only two away wins in the league last term.

*Asante Kotoko have won twice of their last three matches at the Essipong Stadium.

(W2 D0 L1)
*Ashanti Gold SC are without a win in their last visits to the Essipong Stadium.

PERMUTATIONS
*Asante Kotoko will need only a draw to allow make it to the final of the G6 tournament.

*Anything short of win for Ashanti Gold will see them bow out of the G6 tournament.