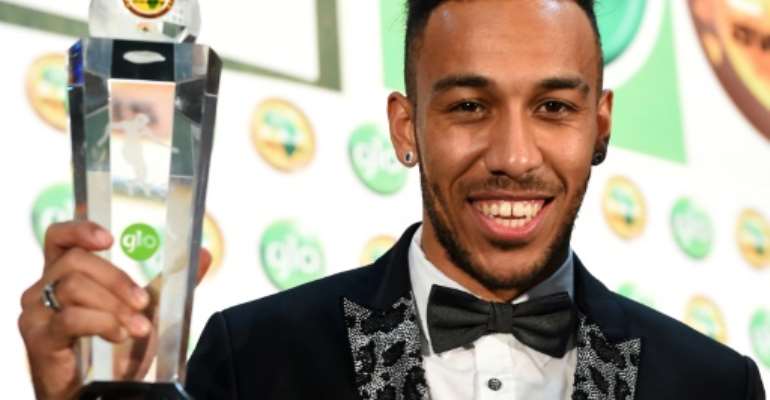 Gabonese striker Pierre-Emerick Aubameyang poses with the African Footballer of the Year award in Abuja, Nigeria, on January 7, 2016. By Pius Utomi Ekpei (AFP)

The Gabonese, who is the leading Bundesliga scorer this season, was reduced to tears after stopping Yaya Toure winning a fifth straight title on Thursday.

"I am staying at Dortmund," the 26-year-old Aubameyang, who has been linked with a big-money move to Arsenal, Manchester United or Liverpool, said after accepting the prize at a gala in Abuja.

"I am so happy. I am not someone who usually cries but it is quite an emotional moment.

"When you are standing alongside players like Yaya Toure or Andre Ayew there is pride in winning such a trophy ahead of them because they are great players and I obviously admire them a lot."

The first player from Gabon to win the title said he hoped to scoop a second award next year with his rich run of form.

"I will really have to work a lot. Obviously, I think I have the skills and the talent to make it again next year but it will require lots of work and many sacrifices as well."

Aubameyang, who has scored 18 goals in 17 Bundesliga games this season, earned 143 points in a poll of African coaches, seven more than Manchester City's Toure. Ghana and Swansea City striker Andre Ayew was third on 112 points.

"I am disappointed but that won't take anything from anybody," said Toure, the Ivory Coast captain. "I am sure Andre is also disappointed after what he did last year.

"This is not the time to complain. We will all go back and continue to work hard."

Aubameyang dedicated his award to his country and Gabon's President Ali Bongo Ondimba was among the first to congratulate him.

"His genius is a major asset for the Panthers in preparation for the next Africa Cup of Nations," said Bongo. Gabon will host the next next African championship in 2017.

"We have good players and a good national team in Gabon," declared Aubameyang.

Frenchman Herve Renard, who led the Ivory Coast to the 2015 Africa Cup of Nations, was named coach of the year.

It was his second such award after the 47-year-old also led Zambia to upset favourites Ivory Coast to lift a first-ever Nations Cup trophy in 2012.

"You never win alone so I would like to congratulate my staff," said Renard.

"I would like to congratulate the Ivory Coast federation because they believed in me and I dedicate this trophy to all the people around the world from Ivory Coast because it was an amazing victory for us."

Ivory Coast were named team of the year.