Bawumia’s Flesh is too Poisonous for these NDC Cannibals 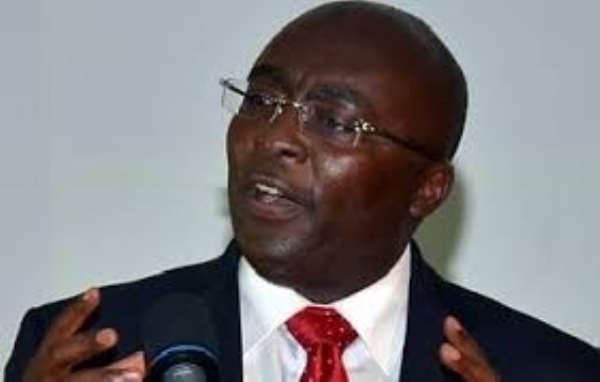 Like the human vultures and butchers that they have always been known to be, Mr. Johnson Asiedu-Nketia and his desperate associates of the ruling National Democratic Congress (NDC) came out of the woodwork to call Dr. Mahamudu Bawumia a liar, and other names too obscene to publish in these pages, and demand their proverbial pound of flesh.

And like bloodhounds, they also wanted to pounce on him and literally tear his body apart and drink his blood, like the godforsaken offspring of Mr. Dracula (Who know who I am talking about, of course). This was shortly after Mrs. Charlotte Kesson-Smith Osei, Chairperson of the Electoral Commission (EC), had released her indescribably insulting statement imperiously asserting that the EC did not deem it practically sound to expunge the names and vital statistics of the 76,000 Togolese nationals illegally packed onto Ghana’s National Voters’ Register.

Well, Mrs. Osei’s rather maliciously lame and cynical argument was that the 76,000 Togolese nationals criminally packed onto Ghana’s National Voters’ Register (NVR) had been “duly registered” to vote in Ghana during the period of the last voters’ registration exercise and thus could not be termed as having been illegally registered to vote in a country whose citizenship they clearly did not hold, or possess, and whose economy they had not positively contributed towards.

Back then, which was just a couple of days ago, as I vividly recall, I promptly pointed out to her that her stance was patently and inexcusably absurd, because there was a significant percentage of underage Ghanaian teenagers “duly registered” to vote during the last voters’ registration exercise, although going by constitutional stipulation, these “duly registered” underage Ghanaian citizens were not qualified to vote.

Then also, to add insult to injury, Mrs. Osei claimed that the Abu Ramadan cause célèbre in which the Wood Supreme Court ruled that National Health Insurance Authority (NHIA)-issued health-insurance cards could not be used to either prove or authenticate one’s citizenship, somehow, only exclusively applied to the pardoned criminal convict who had used the same to win a parliamentary seat in Bawku-Central, or some such municipality, on the ticket of the main opposition New Patriotic Party (NPP).

Mr. Ramadan would be sued by the National Democratic Congress’ candidate and opponent that he had convincingly defeated at the polls for being an alien of Burkinabe citizenship.

Now, the woman that President John Dramani Mahama appointed to replace the recently retired Dr. Kwadwo Afari-Gyan, amidst deafening controversy, partly regarding her own widely alleged Nigerian nationality, would have Ghanaians believe that, indeed, the Supreme Court decision prohibiting the use of our national health-insurance cards as citizenship-identification cards does not apply to other people who might have been illegally registered to vote by the use of these same invalid identification cards.

For me, though, what was even more scandalous was for Mrs. Osei to claim that the refusal by her Togolese counterpart to release a copy of the same voters’ register which Team Bawumia and the NPP had used to convincingly prove their case that, indeed, the voters’ register of the Ketu-South Constituency, in the Volta Region, had been criminally and illegally packed with some 76,000 Togolese nationals, in of itself proved beyond any iota of doubt that Team Bawumia had flagrantly, perhaps even criminally, falsified the evidence that it had presented to the Electoral Commission to argue its case on the imperative need for Ghana’s irreparably compromised NVR to be scrapped and totally recompiled.

Now a Senior Advisor to Togo’s main opposition leader, Jean-Pierre Fabre, by the name of Masseme Esse, has told Ghana’s Atinka Radio that, indeed, the copy of the Togolese voters’ register presented by Team Bawumia to the Electoral Commissioner is an authentic copy of the same kind as that which was used by the Togolese EC to conduct its most recent election (See “Togo’s Opposition Confirms Authenticity of NPP Evidence” Atinkafmonline.com / Ghanaweb.com 1/7/16).

Now, dear reader, tell me, whose credibility is in question here? That of Team Bawumia or Mrs. Osei and the President who unwisely appointed her to her job?