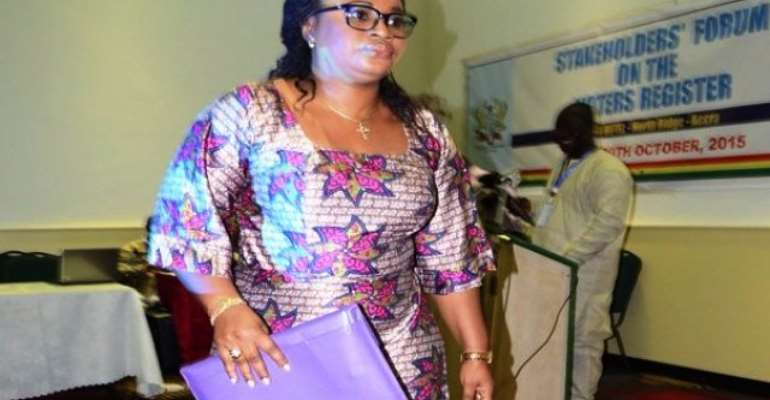 Spokesperson of the forum, Mr Richard Nyamah, said Mrs Osei is still a board member of the Ghana Reinsurance Company Limited, which, he said contravenes the country’s constitution, indicating that: “Article 44 clause 4 demands that if she is the chairman of the EC, she is not supposed to hold any other public office”.

In an interview with Joy FM’s Francis Abban on Thursday January 7, 2016, Mr Nyamah said: “I have a copy of the 2016 diary of the Ghana Reinsurance Company Limited and she is stated as a member of the board. I also have impeccable information that after her swearing in as EC chair of the Republic of Ghana, she travelled to Kenya on an educational conference in 2015, so, she is still an active member.”

Mr Nyamah said the group will be compelled to nail Mrs Osei with more revelations if she dare come out to deny membership of the company’s board.

“I want her to deny it then we will put it out there. Let her come and deny that she is not an active member and we will make all the information on her public, for now I’ll like to hold on to some of the arsenal,” he said.

Mr Nyamah has further questioned the integrity of the EC chair, saying that taking allowances from two institutions as a public official amounted to corruption, especially when the constitution bars her from holding any other office as chair of the electoral body.

“It brings into question the person’s integrity on financial prudence and beyond even this because she is now on double salary or let me say allowance. In one instance, she is taking allowances, as a member of the board and claiming her salary as a commissioner,” he said.

He believes the EC chair has shown her failure in managing finances by bloating the budget for the 2016 elections.

“Fast track to budget presented to parliament for 2016 elections, GHS1.4 billion was the request then GHS 826 million is approved. Go to 2012 where Afari Gyan’s budget was approved and it was GHS 243 million and that included buying biometric machines to have the elections done.”

“I am questioning her in terms of corruption and to, at least, know that it is my focus,” he stated.