Indeed This Year's Weather Is Similar To That Of 1983 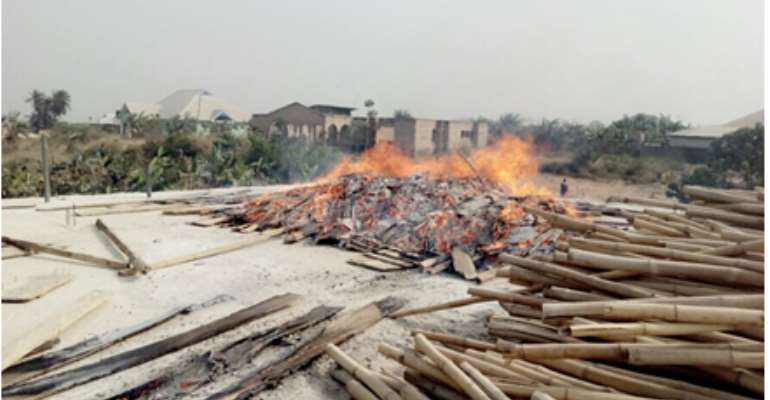 A section of the woods blazing

On Wednesday 6th January 2016, I was awakened from an afternoon nap by my neighbours who were shouting fire, fire. I went out and I saw both children and elders hurriedly running towards the direction of the fire. A capricious pandemonium and cacophony filled our vicinity.

The fire was spreading from a top of an uncompleted building. According to the eyewitnesses, the fire on that particular building started around 15:00 GMT. What caused the fire was a bit astonishing. After a thorough investigation conducted by the Fire Service Personnel specifically from the Menhyia Unit, an ember was believed to be carried by wind from a ground level bushfire all the way onto wood boards and bamboos which was packed on top of the uncompleted building.

The ground level bushfire was believed to be set up by either hunters or landlords who wanted to catch games or to burn the bushes around their surroundings.

The fire was a devastating one because the velocity of the wind on the day was extremely strong. It burnt almost all the bushes around the vicinity. It spread to over 10,000 meters of area and finally landed on the woods on top of the uncompleted building.

When the Fire Service Personnel arrived, almost all the woods were completely burnt but still blazing. One could still feel the heat emanating from the fire even standing 1000 meters away from it.

The Fire Service personnel did a yeoman's work in combating the fire. It took them exactly 20 minutes to put the fire out.

The owner of the uncompleted building Adnan Abdul Wahab who currently stays at Menhyia Roundabout said he was informed about the development by a friend who stays around. Adnan who is a Zoomlion Supervisor at the Bantoma Sub Metro said the woods were exactly 250 pieces in number. The total cost of the woods he also said was GH¢3000 but added that the cost of the damages was around GH¢1,200. He also added that, nothing was damaged apart from the woods. He later lamented that he fears the heat might cause the building to collapse in future.

The head of the Fire Service Personnel on the mission who only gave his name as Mr. Danquah, said the Meteorological Service had already indicated that this year's weather is similar to that of the 1983. He explained it by saying that the velocity of this year's wind is always high just as that of the 1983 so all and sundry must be extremely cautious when handling inflammable materials or else the slightest mistake can cause fire outbreak.

He added that, they just returned from a mission only to be called again to this particular one. He later emphasized that, there is a bit problem with their usual 192 line so if after unsuccessful attempt to reach the Fire Service in Ashanti Region, inhabitants can reach them through these contacts; 0505001415 and 0501488555 which are of the Regional Office and Menhyia Office respectively.

Finally, Mr Danquah thanked the Assemblyman of Abirem Honorable Abdul Fatawu, the Policemen from Kinyase as well as the owner of the uncompleted building who came out and helped. He also told the Assemblyman of Abirem Mr. Abdul Fatawu that if possibly, he should organise a public education on the effects of bushfire in the community in order to help curb future occurrences of such unprecedented situation.

Latest Photo Reports
Catch up with all the political quotes from our politicians.
Advertise here
More Opinion
ModernGhana Links
"YOUR CUP IS FULL" - A response to the comments of the Finance Minister – Richard Kweitey TETTEH
Ghana is not a political party and its citizens are not party members either
The police must release Shatta Wale immediately and apologise to him
Who benefits from the creation of the new block AUKUS?
Funny Face and Shatta Wale got it all wrong
Anglo Gold Ashanti: Provide answers to your opaque, shady deals
Problems facing people in the rural areas.
We Bono youths are solidly behind Dormaahene on his radical approach to the Anti-LGBTQI+ Bill
Hon. Ramadan a friend by action; A servant in deeds
TOP STORIES