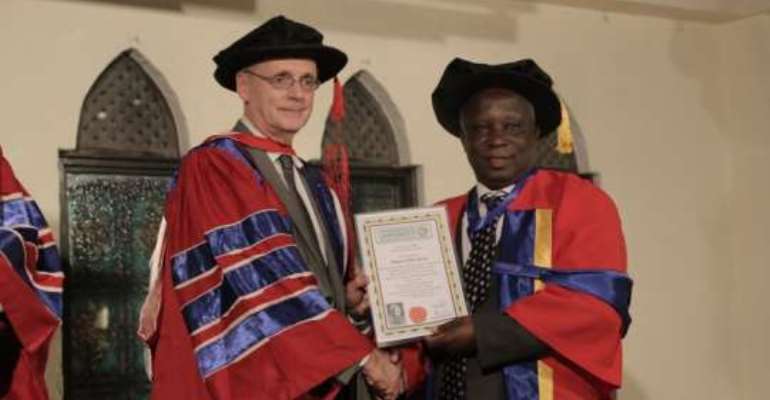 Accra, Jan. 6, GNA - The Executive Chairman of Samara Company Limited, Sampson Effah Apraku, has been honoured with a Doctorate Degree by the Commonwealth University in collaboration with the London Graduate School at the just ended 12th Dubai Leadership Summit.

The event took place in Dubai, with more than 20 awardees from Africa - mainly Ghana Nigeria and South Africa, who have distinguished themselves in their various fields of work at managerial level and religious background.

Dr Sampson Effah Apraku was honoured with a Doctor in Business Administration (DBA) based on his service, selflessness and other outstanding contributions as Chief Executive of Samara Group through, which the lives of many Ghanaians have been touched positively.

The citation accompanying his DBA certificate reads: 'Mr Sampson Effah Apraku's journey as an Entrepreneur began years back and has been serving as the Executive Chairman of Samara Group of Companies since 2007, exhibiting extensive practical knowledge in management of business.

'He is one man who has a knack for seeing ahead. In the early 2000s, when a couple of insecticide sprays and coils invaded the Ghanaian market (although a good thing that sought to fight against malaria), this left a few people in the society disadvantaged.

'Some people complained of headaches and colds after utilising such insecticides, while others had their asthma triggered. Following this challenge, his aim was to bring a change that would prevent people from dying from malaria.

The citation said the vision of Dr Apraku to move from marketing of curative drugs to production of preventive ones led to the production of Sasso Insecticide Spray and Coil and as expected.

The Sasso Brand has benefited immensely from his expertise. The brand was adjudged The Top Emerging Brand and Fastest Growing Brand 2014. Again Fastest Growing Company of the Year under the Head of State Award Scheme, Business Award 2015.

Dr Apraku was also a recipient of the prestigious Nobles International Award for men and women of integrity in West Africa.

He has received several awards including the Overall Best Achiever of 2015 award given to him by the West Africa Regional Magazine at its Achievers Award held in Nigeria.

The Chancellor of the Commonwealth University, Professor Michael Addison said the event marked the 10th anniversary of the prestigious University, which has awarded many business magnates since its inception in 2005.

He said the University seeks to create, maintain, and extend the highest standards of its services in empowering leaders, managers, entrepreneurs, and professionals to be more effective in their jobs and to be responsive to national and community need.