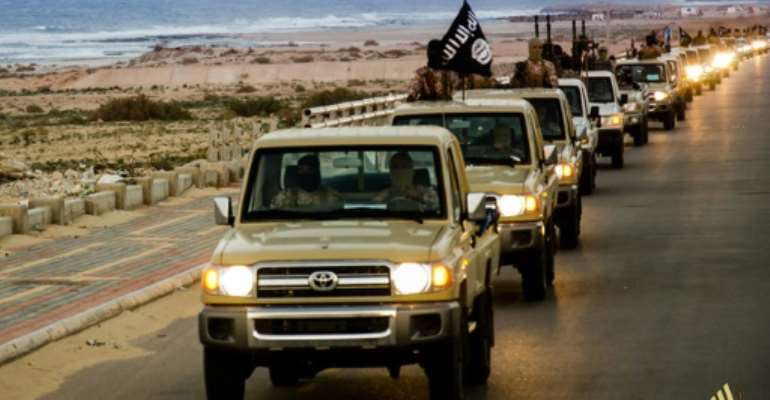 An image from Islamist media outlet Welayat Tarablos on February 18, 2015 allegedly shows members of the Islamic State group parading in a street in Libya's coastal city of Sirte. By (Welayat Tarablos/AFP/File)

For the second day running, IS jihadists -- an increasingly powerful force in strife-torn Libya -- attacked oil facilities in the so-called "oil crescent" along Libya's northern coast.

IS has for several weeks been trying to push east from its coastal stronghold of Sirte and officials have warned of crippling consequences if the jihadists manage to seize control of Libya's oil resources.

"Fighting continued today between Daesh and oil facility guards backed by the air force," said Ali al-Hassi, a spokesman for the unit tasked with guarding oil installations, using an Arabic acronym for IS.

"The fighting is happening in an area 20 kilometres (12 miles) southwest of Al-Sidra and we have lost seven men," he said.

The key Al-Sidra and Ras Lanouf oil terminals were both targeted in IS attacks on Monday, prompting the National Oil Company to call on Libya's internationally recognised government to "fully assume its responsibilities" and support guards with weapons, ammunition and equipment.

"If Daesh took control of oil terminals and fields around Al-Sidra, it would greatly paralyse the foundations of the Libyan state," it said, adding that many guards had not been paid for several months.

IS fighters on Monday launched attacks, including a suicide car bombing, near Al-Sidra and Ras Lanouf, an army official said.

The pro-IS Amaq news agency released video footage allegedly showing IS fighters entering Al-Sidra on Monday, but the army official said they had been repulsed.

The jihadist group said the attack came after it took control of Ben Jawad town, 150 kilometres (90 miles) east of Sirte.

Air strikes were carried out "from dawn until dusk" on jihadist targets between Al-Sidra and Ben Jawad, an air force colonel in Misrata said.

The jihadists have taken advantage of chaos in Libya since the 2011 revolt that ousted and killed longtime dictator Moamer Kadhafi to extend their influence there.

Monday's attack was the first of its kind since IS seized Kadhafi's hometown of Sirte in June 2015.

Ludovico Carlino, a senior analyst at IHS Country Risk said the attacks were part of IS's "declared strategy of isolating and controlling energy assets in Libya."

The taking of Ben Jawad was a major step for IS, he said, that would help the group "increase its forces and reach the critical mass necessary to launch an offensive aimed at controlling the Sirte Basin," home to most of Libya's oil reserves.

"They want to show their potential. They want to attract new recruits from the region," he said.

But he said that even if the jihadists were able to seize any facilities "it's not sure they would be able to sell the oil" due to the country's geography and competition with local smugglers.

Oil is Libya's main natural resource, with a pre-revolt output capacity of about 1.6 million barrels per day, accounting for more than 95 percent of exports and 75 percent of the budget.

But unrest has forced a major slump in production.

The country sits on reserves estimated at 48 billion barrels, the largest in Africa.

Libya has had rival administrations since August 2014, when an Islamist-backed militia alliance overran Tripoli, forcing the government to take refuge in the east.

The United Nations is pressing both sides to accept a power-sharing agreement it hopes will tackle help to reverse IS's territorial gains.

On December 17, under UN guidance, envoys from both sides and a number of independent political figures signed a deal for a unity government.

This Government of National Accord's presidential council on Tuesday rejected the attack on Libyan's "oil resources in Al-Sidra and the oil crescent".

"The council calls on all Libyans to resist elements of this terrorist organisation," it said in a statement.

UN envoy to Libya Martin Kobler called on Twitter for Libyans to rally around the GNA.