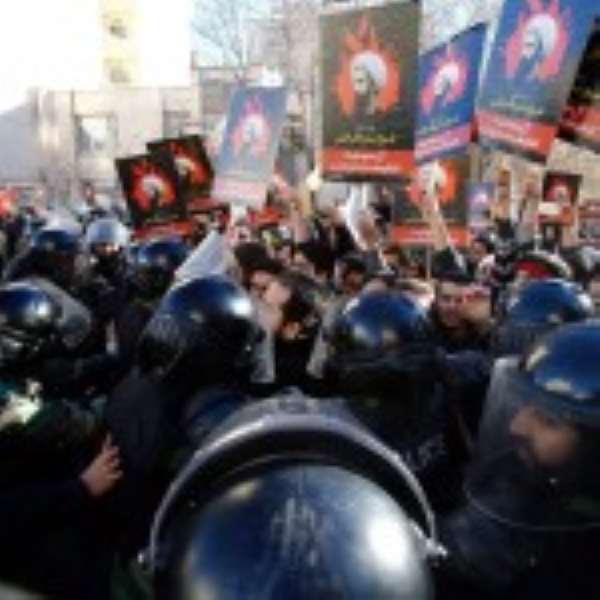 A number of Saudi Arabia’s allies have joined diplomatic action against Iran after the Saudi embassy in Tehran was attacked amid a row over the execution of a Shia Muslim cleric.

Bahrain and Sudan have both severed relations with Iran, and the UAE has downgraded its diplomatic team.

Saudi Arabia and Iran are the key Sunni and Shia powers in the region and back opposing sides in Syria and Yemen.

Bahrain, which is ruled by a Sunni monarchy but has a majority Shia population, on Monday gave Iranian diplomats 48 hours to leave the country.

It accused Iran of “increasing, flagrant and dangerous meddling” in the internal affairs of Gulf and Arab states.

It said the attack on the Saudi embassy was part of a “very dangerous pattern of sectarian policies that should be confronted… to preserve security and stability in the entire region”.

Bahrain, which hosts the US Navy’s 5th Fleet, has frequently accused Iran of fomenting unrest in the country since 2011 – a charge Tehran denies.

A Sudan foreign ministry statement read: “In response to the barbaric attacks on the Saudi Arabian embassy in Tehran and its consulate in Mashhad… Sudan announces the immediate severing of ties with the Islamic Republic of Iran.”

The United Arab Emirates is downgrading its diplomatic representation in Tehran, including a recall of its ambassador, but has said it will continue trade links.

There are fears sectarian strife may spread in the region following the execution of Sheikh Nimr al-Nimr and 46 others in Saudi Arabia on Saturday after they were convicted of terror-related offences.

On Monday, two Sunni mosques in Iraq were bombed and an imam killed. ‘Pursuing confrontation’

Saudi Arabia announced late on Sunday that it was severing diplomatic relations with Iran after demonstrators stormed the Saudi embassy in Tehran. Protesters set the building on fire before being driven away by police.

Saudi Arabia has recalled its own diplomats.
Iran’s foreign ministry on Monday accused the Saudis of “continuing the policy of increasing tension and clashes in the region”.

Ministry spokesman Hossein Jaber Ansari said: “Saudi Arabia sees not only its interests but also its existence in pursuing crises and confrontations and attempts to resolve its internal problems by exporting them to the outside.”

He defended Iran’s response to the embassy attack, saying it had “acted in accordance with its obligations to control the broad wave of popular emotion”. Fifty arrests were made.

Iran’s First Vice-President, Eshaq Jahangiri, said it would be Saudi Arabia that lost out by severing ties, accusing it of “hasty and illogical actions”.

But in announcing the cut in ties, Saudi Foreign Minister Adel al-Jubeir accused Iran of having “distributed weapons and planted terrorist cells in the region”.

“Iran’s history is full of negative interference and hostility in Arab issues, and it is always accompanied by destruction,” he said.