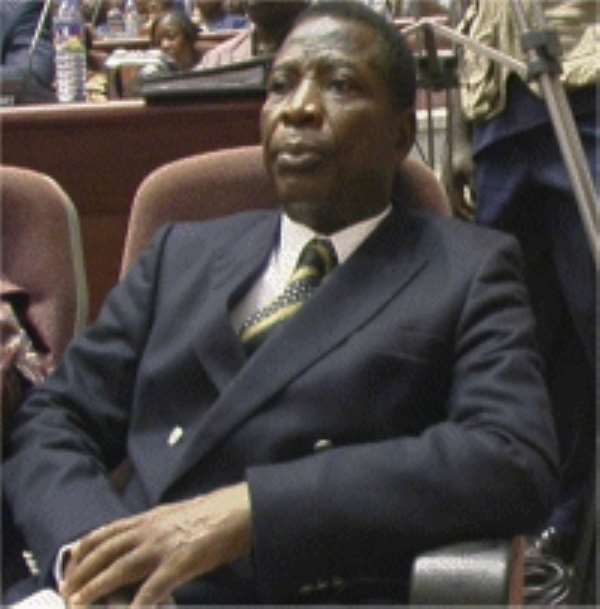 Political playing field tilted to NPP Arrest and trial of NDC aspirants justified IMF, World Bank have given Ghana raw deal over HIPC After weeks of what he called underground campaigning, the Chairman of the Grand Coalition and leader of the Great Consolidated Popular Party (GCPP), Mr Daniel Lartey, has surfaced with a charge that President Kufuor wants to rig this year's elections.

“Feeling that he will lose this elections he wants to rig it and win”, charged the man known as Mr. Domestication at his scintillating best in a 45-minutes sizzling interview with this paper last week Wednesday.

Constantly boasting of his and his Coalition's popularity, political maturity and experience, he said despite government's machinations to rig the elections, Ghanaians have promised to vote from the present system to a change of domestication.

On the top of his accusations was one that the Kufuor administration has not laid a level political playing field for all the contesting parties. He argued that present conditions are heavily tilted in favour of the New Patriotic Party (NPP).

Not at all satisfied with the way government has so far handled the electoral processes, he cautioned that as contestants, the Grand Coalition would make sure that things are made right for all of us to sell our messages to the electorate to enable them make the right choice.

Dan Lartey, maintained that earlier government's attempt to control the Electoral Commission's procurement procedure and the subsequent shortages of electoral materials during the recent registration and photo taking exercises in particular were grand signs that President Kufuor wants to rig the elections.

He expressed the view that “although the present administration is not prepared to give Ghanaians the freedom to choose their own leader”, he believes the people would be the final arbiters.

But the GCPP founder does not see any truth in assertions that government was harassing and intimidating its political opponents, saying in every democracy there are ups and downs and that Ghana cannot be an exception.

According to him the arrest and prosecution of two aspiring members of parliament from the main opposition National Democratic Congress (NDC) for alleged electoral fraud could not be construed as political harassment and intimidation.

It would be recalled that two prominent parliamentary aspirants of the NDC, Said Sinare as well as ace sports commentator, Nii Lamptey Vanderpuye, the de-selected NDC aspirants for the Ayawaso Central and Odododiodio constituencies respectively, are standing trial for alleged electoral malpractice.

The leadership of the NDC has variously come out to condemn their arrest and trial, accusing government of harassing and intimidating its members. But Mr Dan Lartey sees this as normal, saying, it happens in all democracies worldwide.

A fierce critic of the World Bank and the International Monetary Fund (IMF), he said the NPP government has allowed itself to be given a raw deal by the Bretton Woods institutions. “They have deceived the government to sit down for almost four years doing nothing until they reach HIPC completion point”, he pointed out.

On what he meant by his claim, Dan Lartey, explained that the IMF and the World Bank initially made it look as if reaching the HIPC completion point was the panacea for Ghana's economic woes.

With this alleged deception, he claims the Bretton Woods institutions have put the country into a bad economic situation which would only take his new concept of domestication built on domestic development to redeem the nation from the shackles of poverty.

“These people are putting in our minds inferiority complex which will make us vulnerable to control”, he said, stressing that he felt sad when President Kufuor single handedly took the country to HIPC.

On his recent tour of the Western, Brong Ahafo and the Central regions, the GCPP man claims the people have promised to vote to change from the present HIPC conditions to a real change of positive change of domestication.

“The whole country is aware of using our own natural resources to develop, economically, culturally and socially”, and this is what concept of domestication is about, he said.