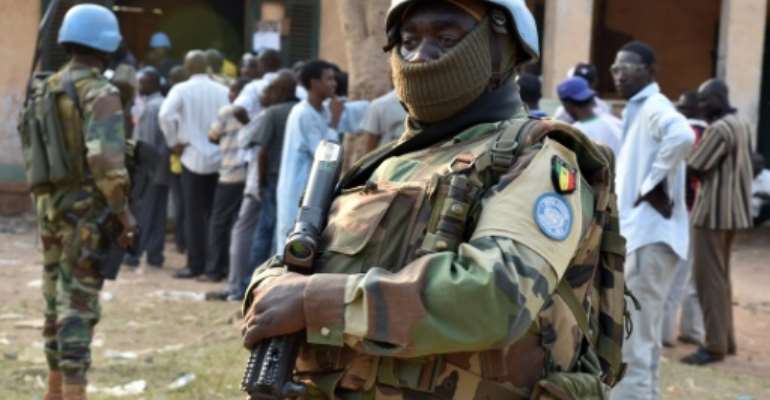 Senegalese UN peacekeeping forces stand guard as people wait to vote at a polling station during presidential and legislative elections in Bangui on December 30, 2015. By Issouf Sanago (AFP)

While initial reaction to the voting process was positive, there were some reports of minor irregularities and the national electoral commission, admitting a number of "logistical difficulties", urged candidates to use legal means to address any grievances.

How the country dealt with any contentious issues "would be particularly important for the credibility of the elections", the European Union said in a statement.

In a sign of the ongoing tense security situation, the government issued a statement banning fireworks and celebratory gunfire in the capital Bangui on New Year's Eve.

Voters had turned out in large numbers for Wednesday's oft-delayed presidential and parliamentary elections, which went off without major incident and were hailed as "a success" by the head of the UN peacekeeping mission MINUSCA, Parfait Onanga-Anyanga.

UN forces operating in the deeply poor country alongside French troops helped to ensure that polling stations stayed open late into the night so people could vote.

The EU noted that the bloodless voting "bore testament to Central Africans' determination to take charge of the destiny of their country".

But the country may have to wait at least a week to learn the outcome of the election, which residents hope will restore stability after more than two years of brutal conflict.

Three men who have all held high political office in previous governments are considered the frontrunners in the 30-strong presidential race,including ex-premiers Martin Ziguele and Anicet Georges Dologuele.

The mostly Christian country has been rocked by violence since veteran leader Francois Bozize was ousted in a March 2013 coup by the mainly Muslim Seleka rebel alliance, which installed Michel Djotodia, the first Muslim head of state.

Both now face international sanctions over the fighting that pitted mainly Islamic rebels against vigilantes from the Christian majority.

When Djotodia quit in January 2014 under international pressure, his disbanded Seleka rebels were running amok even as new president Catherine Samba-Panza was sworn in to oversee a transition to the new elections.

The savagery unleashed by the mainly Christian "anti-balaka" (anti-machete) vigilantes in response to Seleka atrocities has cost thousands of lives and driven a tenth of the 4.8 million population to flee their homes.

As the National Elections Authority (ANE) began the count Thursday, cement barriers were placed outside the main tallying centre in Bangui along with a UN armoured vehicle to prevent any attacks by supporters of disgruntled politicians.

Although there were no reports of major violence or widespread fraud, ANE spokesman Julius Ngouade Baba told reporters Thursday the commission had noted a number of organisational problems.

"There have also been printing errors on ballots in certain constituencies," he said, while "some ballots never arrived at the counting centres".

He added that candidates in the affected constituencies could take any possible complaints to the Constitutional Court and that some parliamentary by-elections may needed to be held.

A second round of voting is set for January 31.

Prominent candidates have already declared themselves pleased with Wednesday's polls.

"The results are very, very satisfying," one-time prime minister Ziguele told AFP. "My party (the Central African People's Liberation Movement) is getting high scores in zones where we're not deeply rooted, while in 'our' regions, the scores are Soviet-style!"

Aides to Dologuele, who also served as prime minister, said he was "largely ahead" in most constituencies in Bangui and in several key provincial towns.

The last of the three favourites, Karim Meckassoua, a Muslim former foreign minister, could not be reached for comment.

Archange Touadera, a prime minister under Bozize, is now also said to have emerged as a possible contender for the top job.

The CAR, a former French colony, possesses considerable mineral wealth -- notably diamonds -- but after years of misrule studded with coups, army mutinies, rebellions and general strikes, the economy is in ruins, propped up by international donors.