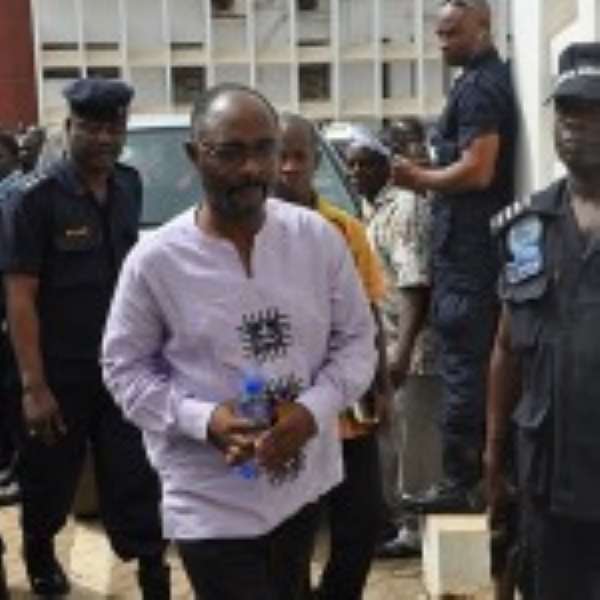 Businessman Alfred Agbesi Woyome is yet to make good his promise to refund the controversial GH¢51.2m judgement debt paid to him by the state.

Osafo Buabeng, lawyer for the National Democratic Congress (NDC) financier, had told a nine-member panel of Supreme Court judges which included Chief Justice Georgina Wood and Justice William Atuguba, that the money would be refunded to the state by the end of the year.

He is quoted to have said that his client – Mr. Woyome – had already met with the Attorney General on four occasions to discuss a payment plan.

Buabeng's Sarcasm
Curiously, when Osafo Buabeng was contacted yesterday for comments in respect of the case, he sarcastically and rudely claimed that Nana Akufo-Addo, the 2016 flagbearer of the New Patriotic Party (NPP), had paid the money for Woyome.

Mr. Woyome's lawyer does not know if the full amount has been paid but he is sure the NPP presidential candidate has paid the money for his client.

Meanwhile, the Office of the NPP flagbearer said the comments should be treated with the uttermost contempt they deserve.

DAILY GUIDE's checks at the Attorney General's Department to ascertain whether or not the money had been paid were unsuccessful.

AG's Silence
At the AG's office, the paper was told that although Mrs. Yvonne A. Obuobisa, the acting Director of Public Prosecutions (DPP), was in the office, she could not speak to the issue because she was “tight” with other things.

Officials at the registry of the Supreme Court could only speak to the paper if it filed for a search for the information it required for GH¢50.

Woyome, the self-styled bank roller of the governing NDC, was alleged to have defrauded the state by false pretences and causing financial loss to the state to the tune of GH¢51.2 million.

Woyome Freed
Consequently, on March 12, 2015, an Accra High Court, presided over by Justice John Ajet Nassam cleared the NDC businessman of any wrongdoing.

The judge, who was recently named in the Anas' judicial bribery scandal, held that he did not understand why key actors in the case, including former Attorney General and her deputy, Betty Mould-Iddrisu and Ebo Barton-Odro respectively, were not invited to testify in the case.

While describing the prosecution’s case as “shoddy,” the now suspended judge was emphatic, among other things, that the prosecution had twisted facts when it stated that there had been a misrepresentation, leading to the payment of the money to Mr. Woyome.

But the prosecution disagreed, insisting that Justice Ajet Nassam erred in law when he acquitted and discharged Woyome of the charges brought against him by the state.

According to the prosecution, the personalities the trial judge said should have been called by the prosecution were immaterial to the case because officers from their various departments had testified.

Immaterial Witnesses
A statement signed by Mrs Obuobisa said, “All these personalities referred to by the judge had nothing useful to add to what the prosecution witnesses who were called had already said.

The various roles played by these personalities were not in their personal but official capacities.”

Martin Amidu, former Attorney General and anti-corruption campaigner, had obtained a favourable judgement from the Supreme Court in a suit filed against Mr. Woyome, Waterville Holdings and Austro Invest for fraudulently obtaining GH¢51.2 million judgement debt from the state.

The other personalities cited in the judgement debt scandal, who did not testify, include then Head of the Legal Department of the Ministry of Finance and Economic Planning (MOFEP), Paul Asimenu and a Chief State Attorney, Samuel Nerquaye Tetteh, who advised the state to pay Woyome and ended up having his wife account credited with money from the NDC businessman.