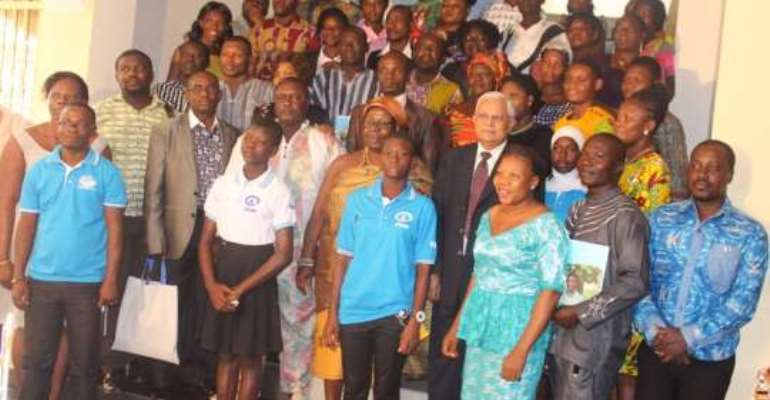 Koforidua, Dec. 30, GNA - Beneficiaries of the Plan International Ghana Girl Power Project (GPP) have lauded the organisation for empowering them towards the fulfilment of their potentials.

The beneficiaries, who cut across the Eastern, Upper West, and Ashanti Regions expressed, their gratitude and promised to carry on in that manner, even as the project had come to a close.

The testimonies were captured at the official close-out ceremony of the GPP, which aimed at developing girls and young women to achieve their full potential, at an event in Koforidua, in the Eastern Region.

Muniratu Shamsudeen, a pupil of Kukurantumi Islamic Junior High School, who shared her testimony, said the project has helped build her self-esteem, exposed her to leadership techniques, and helped her to be more sociable to help share ideas with her peers.

Janet Agyemang, a pupil of Ofori Panin Secondary School MA Junior High School, who benefited from the project, said the GPP has exposed her to the various forms of abuse, with teenage pregnancy in the community declining drastically.

Inspector Eunice Afelipok Atnya of the Domestic Violence and Victim Support Unit (DOVVSU) of the Ghana Police Service, also thanked Plan International Ghana for providing the unit with an office space, office furniture, computers, and a water storage tank to address issues of violence against mostly the young girls.

The GPP was implemented in nine districts and 250 communities in the three regions.

Also 196 head teachers and twenty circuit supervisors from four districts have been trained on how to provide leadership for learning, he said.

'One area that made significant impact in the domain of education is the Girls camp that was organised for 1,552 girls who were mentored and trained to develop skills in entrepreneurship, mathematics, English and science.

A total of 2,550 children have received in-kind scholarship packages. Four hundred children club patrons and executives have been trained on leadership skills, child participation, violence and abuse, etc.', he said.

With regards to girl protection against violence, community durbars on violence against girls and young women was held in the project communities reaching over 500,000 people.

Also a total of 260 Rights of Children Clubs was established in the three regions with eight district child panels strengthened on project districts, with several trainings and workshops organised to curtail violence within their respective districts and communities, to ensure they are equipped with the needed knowledge, he said.

He added that 175 District Assembly Members and officials have also been trained on child protection, prevention and response issues as well as gender equality, during the project.

'180 staff from the DOVVSU, social welfare, National Council for Civic Education and the Ghana Education Service have been trained in the project districts in Gender based violence and violence against girls and women', he said.

The project was developed by six civil society organisations in the Netherlands who worked together In the Girl Power Alliance which was led by Plan Netherlands.

Plan International Ghana has finally closed the project and handed over to the communities to the welfare of the girls in their various communities.

The GPP was funded by the Ministry of Foreign Affairs of the Netherlands, and was assisted in the implementation by the Africa Movement for Prevention of Child Abuse Neglect, Defence for Children International, Ghana.

Other implementing partners were the Ghana NGO Coalition on the Rights of the Child, Child Research and Resource Centre, Sissala Literacy and Development Programme, The Ark Foundation, and Centre for Alleviation of Poverty, Environment and Child Support.