Is It A Bus Rebranding Or An Advertisement For NDC? 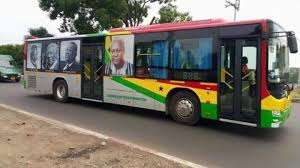 As usual another corruption scandal has confronted the NDC Government in relation to the so called rebranding of buses. Just two weeks or so before that, the NDC was trying to unjustifiably justify the amount involved with the contract for the Ameri electricity project. However, since Mr Osei Kyei-Mensah-Bonsu, the Minority Leader in Parliament disclosed that the Government has used GHC 3,649,044 Ghana’s petroleum revenue to inscribe the portraits of President John Mahama and the three immediate past presidents on 116 buses; the issue has generated so much anger among Ghanaians.

Although, the money involved with the Ameri contract is significantly higher, all the focus has now turned onto the spraying of the buses with the portraits of the presidents because Ghanaians can easily recognise this as a classical case of corruption.

The government sensing the danger and possible electoral backlash in November 2016 has responded very quickly. First, the Chief of Staff set up a committee to investigate the matter. And the committee has recommended that GHC 1.9 million of the contract amount should be paid back to the government.

The BBC reported this as follows: “Ghana has demanded a $500,000 (£350,000) refund after its transport ministry spent $1m to paint more than 100 buses with portraits of the country's recent leaders.” (See: www.bbc.com/news/world-africa-35175324). Of course, it is not sufficient for the Government to only retrieve the over charged amount, those who conspired to rip off Ghana must also be prosecuted to serve as a deterrent against corruption but I doubt if that will happen.

Furthermore, Ms Dzifa Attivor, the then Transport Minister under her watch the dubious contract was awarded has consequently resigned. While the Minister unlike others, has shown maturity for voluntarily resigning over this apparent corruption, it is important also to mention that she acted very recklessly in the whole matter. First, as a minister, she should have known that the contract price was highly overvalued.

In fact, it has emerged that the Company (Crystal Concept) that actually painted the portraits on the buses charged only GHC 100 for each bus for their labour cost. However, Smarttys Management and Production (the Company of Selassie Ibrahim, an activist of NDC), who was awarded the contract, has submitted the labour cost for the same as GHC 2,000 for one bus. That is 20 times or GHC 1,900 more than the GHC 100 that Company that actually did the job charged.

This reveals a typical NDC modus operandi where by all contracts are significantly over charged to the State (e.g., Asiedu Nkatia charges 2 and half times to sell his block for the Buem dam project). Accordingly, either the minister was aware that the contact was significantly inflated or naïve that the price was appropriate. In fact, it is possible that she personally benefitted monetarily from it.

Most importantly, Ms Attivor senselessly tried to justify the naked robbery of the GH₵ 3.6 million charge, by stating that “artistic work is generally expensive.” In my view, this statement was worse than the corrupt act itself.

In addition, the Government’s own investigation instigated by the Chief of Staff has identified that a proper procurement method was "not followed and the contract did not ensure value for money." This again shows a typical NDC modus operandi, where members of the government and the party significantly inflate the costs of projects to enrich themselves through “sole sourcing” instead of submitting projects for competitive tender. This is one of the main reasons why the economy of Ghana has significantly deteriorated because we do not get value for money.

Meanwhile, why did the Government use the oil revenue to recklessly paint the buses with the portraits? I thought the Government has specific guidelines regulating how the revenue from the oil has to be used.

Also, in my view it is silly for any person to refer to the paintings as rebranding unless the person does not understand the act of rebranding. The whole exercise was purely an act of advertising an incompetent and unpopular president, John Mahama for the 2016 elections.

It is therefore clear that it was meant to advertise John Mahama and his NDC government and perhaps, Kuffour’s portrait was only added to deceive people that the act was not for political gains.

Accordingly, the whole exercise has nothing to do with rebranding. The Collins online dictionary defines rebranding as “the process of giving a product or an organization a new image, in order to make it more attractive or successful.” Similarly, the Wikipedia describes rebranding as a marketing strategy in which a new name, term, symbol, design, or combination thereof is created for an established brand with the intention of developing a new, differentiated identity in the minds of consumers, investors, competitors, and other stakeholders.” I do not see how the inscription of the portraits of John Mahama and former presidents on the buses fit into the definition of rebranding because the exercise will not change anything in terms of the patronage of the bus nor is it going to increase its revenue or profit.

It has been reported that in 2004, NPP sprayed the party colours on some buses (for political purpose). However, the difference is that Nana Akomea (the then Information Minister) explained that: the Young Executive Forum of the NPP paid for the branding, the Ghana Telecom also advertised the company on some of the buses, and Metro Mass Transport company indicated that there were more buses available for adverts for interested persons and NDC even showed interest at the time for doing the same. It appears clear that NPP did not shy from the fact that it was using the buses to advertise in 2004 and some entity within the party paid for it.

However, NDC is naively deceiving us that it is rebranding instead of advertising. Most importantly, it has not only used state money but has over charged to make some of its members unduly rich. What value does it bring to Ghana that this amount has to be used while some students study under trees?

From the foregoing, it is clear that the whole exercise was done for two reasons:

Also, the Minority Leader in Parliament has reported again that Ghana is entering into another contract with a Chinese company worth $98 million, which Ms Selassie Ibrahim is going to be a beneficial. Clearly, some few people are squandering the resources of Ghana while the majority irrespective of which party they support, are suffering.

As indicated above, Mahama Government has inflated the costs of projects in order to enrich themselves. And as disclosed by Mr Martin Amidu, Mahama himself is culprit of this sinful act.

As Vice President, he inflated the price involved the aeroplanes acquired for the Ghana Army from Brazil for his personal gains. Also, the STX housing project which he led the negotiation caused Ghana over $300m for the sovereign guarantee, yet not a single brick was laid, and he most likely benefitted from that negotiation.

Similarly, school buildings were costing 3 times as much as it cost during Kuffour’s time just two years after NDC had come into power. The greediness demonstrated in the SADA and GYEEDA projects, and free money paid to Wayome and others all show the wickedness of the current NDC government.

They promised us “Better Ghana Agenda" but instead destroyed the economy. Consequently, they changed their empty slogan to “changing lives”. What lives are they changing when people are dying and others suffering as a result of their naked looting of state resources? They are worse than armed robbers.

They now refer to their economic mismanagement and mess as “economic challenges”, but what challenges? It is all self-inflected wound caused by greed, wickedness and incompetency.

They are now going around showing what they consider as their achievements in their so called green book. “Tweeee, who cannot achieve this with the amount of revenue received from oil, borrowings and etc! Kwame Pianim once stated in relation to the selection of NPP presidential candidate that “We are not looking for a flagbearer, any idiot can hold the flag.” Similarly, the mere building of school buildings and etc. are not any achievement, any “idiot” can do far better than that with the resources that they have received. There is no value for money for any project that they have undertaken, they have inflated their prices exorbitantly.

In November 2016, people should not listen to the propaganda and tribal politics of NDC but should instead look at their performance and vote them out of power. John Mahama can continue to rebrand himself from his failed “Better Ghana Agenda” to “Changing Lives” and spraying his portraits on buses but that will not save him from losing the 2016 elections.

Ghanaians have suffered too much under this government as result of unprecedented high level of corruption, economic mismanagement and dumsor.

Joseph Annor - Master of Business in Accounting and CPA.