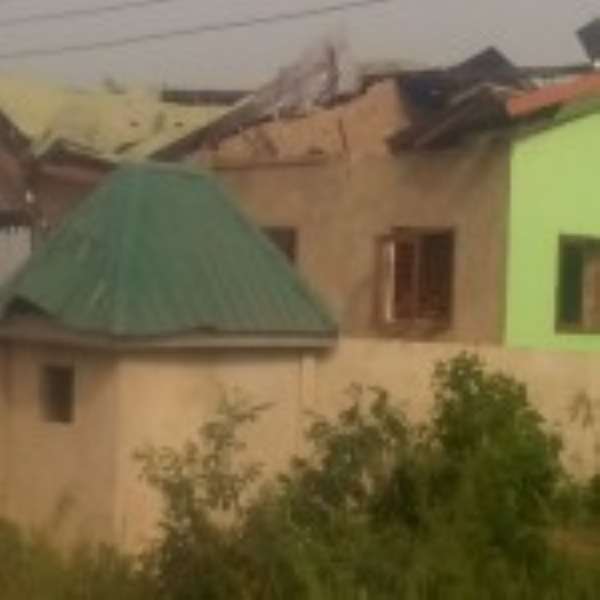 TWO Suspects, Ransford Akwasi Nuamah, 40, and Kwabena Asare, 31, have been arrested by the Eastern Regional Police Command last Friday for attempting to smuggle out explosives at the A.K.Y Mining Site at Peabo near Nsawam in the Eastern Region.

The suspects were busted when the police had a tip off that they were allegedly smuggling the Ammonium nitrate from the Peabo quarry site which had been cordoned off following a recent explosion there which killed one person and injured 27 others, to sell at Kumasi in the Ashanti Region.

A police source who confirmed the arrest to DAILY GUIDE said, the suspects were being detained at the Nsawam Police station, while the police had invited the owner of the quarry, Mr. Adams Kofi Yeboah for investigations.

Facts
DAILY GUIDE gathered that the cause of the explosion which occurred on Wednesday December 23 was due to a fire which swept over the containers stuffed with the ammonium nitrate, igniting them and leading to the explosion which injured over hundred commuters in the area.

Some of the residents who spoke to DAILY GUIDE stated that, they saw  cloud of smoke billowing at the quarry site and quickly drew the attention of the National Fire Service at Nsawam which also responded quickly and came to put off the fire.

According to them thirty minutes after the fire service team had left, they heard a thunderous explosion which shook the ground, which some of them thought was an earthquake.

They indicated that not quite long after, they heard another explosion which hurled a hail of stones at them at terrifying velocity covering their homes and destroying their foodstuffs.

Three persons were earlier reported dead but police had confirmed that only one person, Ibrahim Mohammed, 38 years had died at the spot. It was alleged that he met his nemesis when he rushed to the quarry site to ascertain the mishap after the first explosion. Thirteen others were also critically injured. The explosions had destroyed properties running into thousands of cedis in nearby communities. The former MCE of Nsawam/Adoagyiri whose residence is opposite the quarry site was not spared.

An officer from the Base and Ammunition Depot of the Ghana Armed Forces, Captain Tetteh Kumah briefing the IGP, disclosed that their initial investigations confirmed that there were a total of about 27 containers filled with explosives at the quarry site and that apart from seven that were still intact, all the others had exploded.

According to the Captain, their initial investigations showed that ammonium nitrate was what was mixed with other things and that it was an indication that whoever was operating the quarry was not adopting best practices.

The IGP who briefed a section of the media at the scene said, the police had commenced investigations into the blast, adding that although the abandoned site was registered to store explosives for quarrying, their outfit would ascertain if there was any criminality in the fatal explosion.

No Permit
The Eastern Regional Director of the Environmental Protection Agency, Mr. Felix Addo- Okyere confirmed to DAILY GUIDE that, the owner of the AKY Mining site did not have permit from their outfit to operate the site.

“We learnt they've even stopped working at the site for the past four to five years and it was on 21st December, that, the quarry site Director came to my office for a letter to clear some Ammonium Nitrate from the harbor to the site, but I refused. We however heard that, they brought the materials to the site last Wednesday'' the Regional EPA Boss underscored.

NADMO
The National Disaster Management Organization (NADMO) has expressed worry over the situation and advised the residents around the area to relocate, but they were unwilling to do so.

The Eastern Region Director of NADMO, Ransford Owusu-Boakye, in an interview said, although his outfit had asked the residents to move to a safe place the organization has created, they refused to cooperate.

Mr. Ransford Owusu-Boakye hinted that, the explosion site still poses significant danger to residents living close to it. “There were still over 20 containers of explosives at the abandoned quarry,” he revealed.

According to the Regional NADMO boss, his outfit was currently focusing on assisting the most vulnerable among the victims of the explosion.

The Eastern Regional Security Council has reported that other explosives had been discovered at the site which made it unsafe for residents to live there.

Three victims out of the 27 who were injured were currently on admission at the Nsawam Government Hospital receiving treatment, while the rest had been discharged.