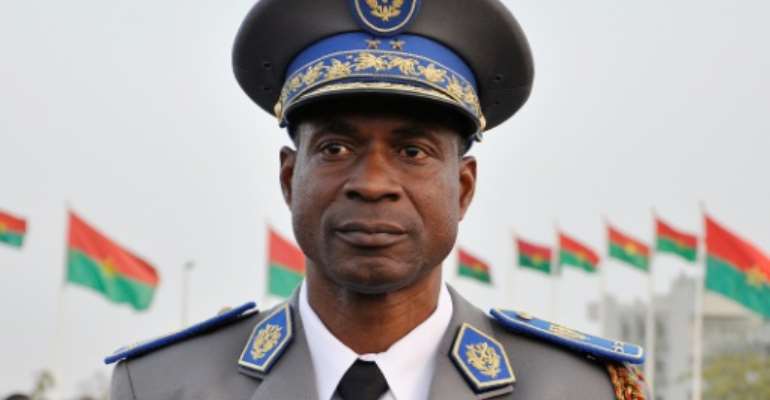 General Gilbert Diendere, leader of a failed September 2015 coup in Burkina Faso, in Ouagadougou on December 10, 2011. By Ahmed Ouoba (AFP/File)

Ouagadougou (AFP) - Around 20 soldiers in an elite Burkina unit have been arrested in a plot to free comrades detained after trying to grab power in September, including coup leader General Gilbert Diendere, a security source said Monday.

The troops -- one of whom is "a foreign national" -- were seized at a meeting where they planned to carry out "an attack on several barracks in the capital," the source said.

In the ensuing chaos, they would free their detained colleagues, as well as Diendere and General Djibrill Bassole, another alleged putschist leader, the source said.

The soldiers seized in the operation "are being held at Guillaume Bassole," a military camp in the centre of the capital Ouagadougou, the source said, speaking on condition of anonymity.

Rumours of an attempted jailbreak from a military detention facility known by the acronym of MACA have swept the city in the last week.

Prime Minister Isaac Zida confirmed "around 20" soldiers had been arrested, adding "they will be tried for the simple fact of conceiving" of the plan.

Diendere mounted a putsch on September 17, using crack troops from a presidential guard. Their unit, the RSP, was loyal to former head of state Blaise Compaore, who was ousted in a popular uprising 2014.

The operation was thwarted by street protesters and support from the army, which attacked the plotters' barracks. At least 11 people were killed and 271 were injured in the demonstrations.

Diendere, a chief-of-staff under Compaore, faces 11 charges, including for "crimes against humanity."

He has also been charged with murder in connection with the mysterious death in 1987 of Thomas Sankara, a charismatic revolutionary leader who was succeeded by Compaore.

Bassole, Compaore's former foreign minister, was detained in the light of recorded phone conversations he allegedly had with the president of Ivory Coast's National Assembly, Guillaume Soro, in connection with the failed coup.

At least 57 people, including about 20 RSP officers, are being held at the MACA in relation to the attempted bid.

Two journalists have also been detained for "criminal association" and other putsch-related charges.

Most of those detained run the risk of the death penalty if found guilty.

The country's president-elect, Roch Marc Christian Kabore, who will be sworn in on Tuesday, has vowed that "justice will run its course."

No country is immune to terrorist attacks; let’s fight it – ...
35 minutes ago

Claims of insecurity in Ghana over recent crimes ‘a bit of a...
39 minutes ago