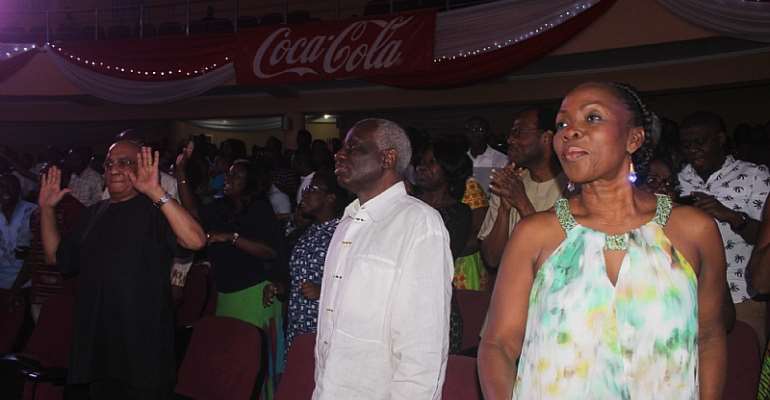 Christmas with Danny Nettey and Friends has become a regular fixture on the gospel music scene. The show which is in it's eleventh year, was held at the Physicians and surgeons hall on the 25th of December 2015. The event, which was slated to begin at 6pm, was an hour late. However the audience were still fired with excitement.

The hall was decorated with a classy touch of red and white, with an obvious attempt put into the lights and stage. The worship event was kicked off with a performance from Overflow choir, after which Ike Nanor and Richie Tachie Mensah delivered a medley.

The ambience was filled with both joy and a sense of solemn reflection, as the audience were kept reminded of God's grace and his present help in the time of our needs.

At almost 8pm, Minister Danny Nettey was introduced. He took the crowd through a tall list of worship songs, reminding them of God's ability to satisfy his people. His hour long performance kept the crowd on their feet with lifted arms. Amongst the audience were notable Ghanaians, including singer Nii Okai and Statesman, Tsatsu Tsikata. Mr. Tsikata's presence proved that in the presence of God, all are equal. The respected lawyer was seen with lifted arms and even busting a few dance moves.

Danny Nettey returned with the overflow choir, featuring a few more of his friends, including Eugene Zuta, Helen Yawson, Nii Okai and More