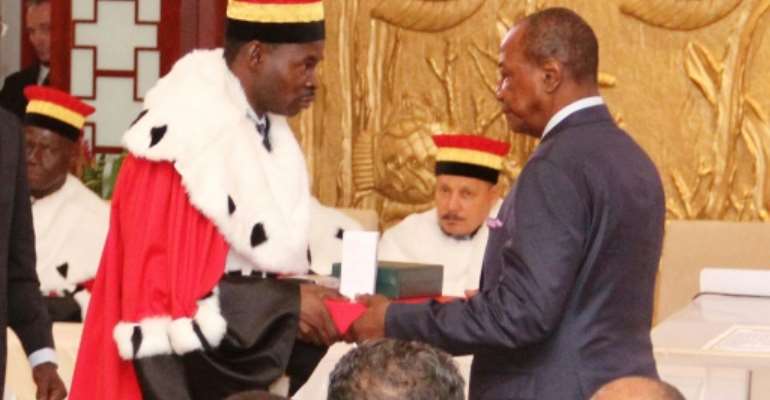 Alpha Conde (R) takes the oath of office for his second five-year term as president of Guinea at the Sekoutoureya royal palace in Conakry on December 21, 2015. By Cellous Binani (AFP/File)

Conakry (AFP) - Guinea's prime minister on Wednesday stepped down in order to make way for a new administration after President Alpha Conde was sworn in for a controversial second five-year term, the presidency said in a statement.

While accepting Mohamed Said Fofana's resignation, Conde asked the government to continue exercising its functions until a new cabinet is formed, the statement added.

Conde, 77, was re-elected in controversial October polls and sworn in for a second term on Monday.

He had already been sworn in at a more elaborate ceremony a week earlier, but was asked to re-read his oath as he had omitted the pledge to "uphold the law" at the first time of asking.

Appeals lodged by several of his rivals calling for the vote to be annulled were rejected by the court, which said they lacked proof or had no bearing on the results.