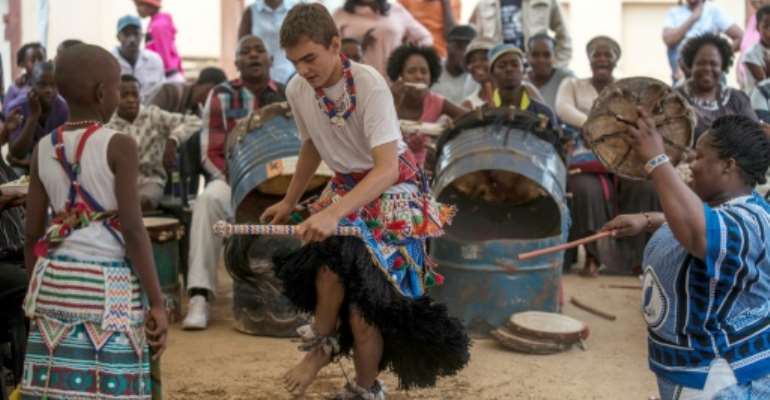 Kyle Todd (C) dances during his initiation ceremony to become a Sangoma at a traditional healer school in Pretoria, South Africa. By Mujahid Safodien (AFP)

Kyle Todd is a spiritual healer, or "sangoma" as healers are known in his native South Africa.

At 12, he is one of the youngest whites to be initiated into the practise of traditional medicine -- a profession traditionally dominated by blacks.

It started with premonitory dreams, which his parents initially didn't take seriously, suspecting he was simply watching too much television.

"First I had visions, I thought it was dreams or just a nightmare," he told AFP in a township near Pretoria where he received his training.

In one of his most vivid dreams, he claims he foresaw the death of South Africa's anti-apartheid icon Nelson Mandela, who passed away in December 2013 at the age of 95.

"A few weeks before Mandela died, I had a vision he was gonna die and people (said) it was a dream, that I am watching TV and getting nightmares... until the dreams ... started becoming true," he told AFP.

He also says he foresaw the xenophobic attacks that rocked Johannesburg and Durban earlier this year, leaving at least seven people dead.

Small numbers of whites have in recent years joined the ranks of South Africa's 69,000 registered sangomas but rarely -- if ever -- are they this young.

Phephisile Maseko, coordinator of the national Traditional Healers Organisation, believes he is the youngest practitioner of his craft from the white minority.

Sangomas occupy a respected position in South African society, particularly among blacks, who view them with a mix of reverence and fear.

Not only do they treat physical and psychological conditions but they also act as mediums.

At home Kyle is like any other pre-teen, spending hours in front of the television and playing video games or football and marbles with friends.

But on a recent weekend he swapped his Xbox controller for a beaded knobkerrie -- a short wooden stick with a knob at one end -- and sat on a reed mat attending to a "patient".

He throws a mix of cow shells, dice, coins and animal bones onto a goat's animal skin mat to obtain a "reading" or diagnosis of Philda Demas's condition.

At the end of a 30-minute consultation, 51-year-old Demas, a black mother of four who works with female abuse victims, is satisfied.

"He was so powerful," said Demas, who likes consulting Kyle because she believes young healers are more honest about the results of readings.

"They tell you everything they see," she said.

Kyle said he did not choose to be a sangoma but was discovered to have healing powers a few years ago.

Even before undergoing training last year, he was already able to "accurately" read the bones, according to Solly Mathebula, his teacher, who is also a sangoma.

Since he qualified, he has been in demand.

"I have got people from overseas now phoning (for appointments with Kyle), I have calls from all over South Africa," said Mathebula.

In his hometown of Musina, near the border with Zimbabwe, people stop him while he is cycling home from school to solicit an on-the-spot diagnosis.

"They stop me on the street and ask 'can you give me a reading', but I say 'no I can't give you a reading now'," the slender soft-spoken youth told AFP.

But he is considerably less popular in the predominantly white neighbourhood where he lives with his parents and younger sister and brother.

He gets teased at school and has lost some friends who fear that he might cast a spell on them.

"Most of (my) friends went against me and started being ex-friends," he said.

"It has been difficult... being in a community that doesn't understand sangomas," his father Mike, a mine diesel mechanic, said.

"They believe that sangomas are part of witchcraft."

Most of Kyle's clients are blacks who have "accepted him very well", according to Mathebula.

"I treat mostly black people, (because) white people, most of them don't believe in this. So they don't come," said his protege.

A bone-throwing session may be required to tell if he will go on to become a full-time sangoma.

His parents want him to finish his education first and pursue a career in pharmacy or herbal science.

Maybe, at that point, "he can combine the two (traditional medicine and science)", his father said.