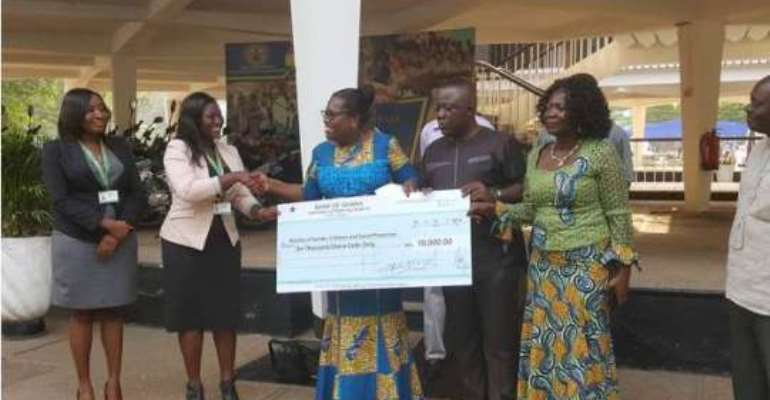 Accra, Dec. 22, GNA - The National Lottery Authority (NLA) on Monday presented a cheque of GHâ‚µ10,000.00 to the Ministry of Gender, Children and Social Protection (MoGCSP).

The donation was in response to the Ministry's request to the NLA to support the 2015 Christmas and New Year donations to vulnerable and marginalized groups in society.

Presenting the cheque, Mrs Maame Kesewaa Dolphin, Corporate Communications Manager of NLA, said the Authority was sympathetic to the vulnerable group such as orphans, the aged and the destitute.

She said this was the reason the NLA was partnering the MoGCSP to put smiles on the faces of vulnerable groups who are sometimes left to their fate during the yuletide.

Mrs Dolphin said the donation also formed part of the Corporate Social Responsibility of the NLA as an institution to help the underprivileged.

Nana Oye Lithur, the Minister of Gender, Children and Social Protection, thanked the NLA for the kind gesture in aid of the Ministry's donations to vulnerable persons in Ghana.

She said this would in no small way support the Ministry's drive to make life comfortable for the vulnerable.

Nana Oye Lithur said the Sector's Christmas donations to vulnerable persons began with a party for 500 kayayes at Mallam Atta Market on Monday, adding, 'They were also registered on the NHIS free of charge. We shall do similar event tomorrow at the Tema station.'

She expressed appreciation to the NLA, saying the gesture was also in conformity with the Ministry's social protection mandate for vulnerable persons and expressed the hope that the items would ease the burden of each of the recipients.

She said the MoGCSP was committed to ensuring that all those people who needed some attention during this festive season receive it.